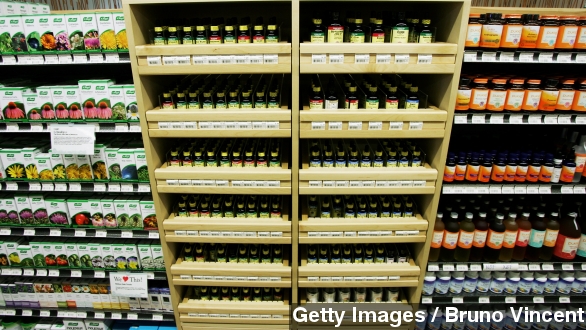 The four retailers are GNC, Target, Walgreens and Wal-Mart.

"They found four out of five products did not contain any of the herbs that were on their labels," a CBS anchor said.

"The tests showed that pills labeled medicinal herbs often contained little more than cheap fillers like powdered rice, asparagus and houseplants, and in some cases substances that could be dangerous to those with allergies."

The worst offender was Wal-Mart, which failed all six tests. The other retailers all had at least one that passed the testing.

The Washington Post points out that since dietary supplements aren't considered food or drugs, they are loosely regulated.

"Federal guidelines require companies ensure that their products are safe and accurately labeled, but the FDA has little power to enforce that rule."

In 2012, the Department of Health and Human Services urged the FDA to require supplement manufacturers to adhere to the same scrutiny as regulated drugs.

But for now, the FDA's hands are tied. A 1994 federal law exempts supplements from the FDA's approval process.

In response, Walgreens has agreed to remove the products from stores nationwide, Wal-Mart and GNC said they both plan to cooperate and Target had not yet commented.