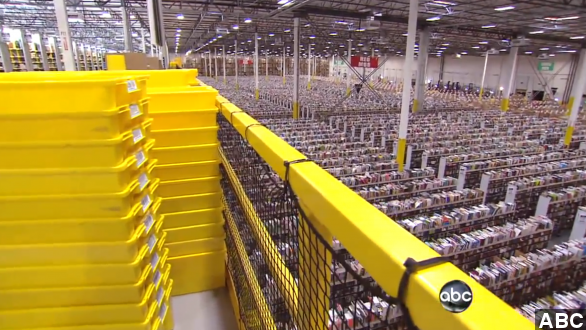 By Evan Thomas
June 15, 2014
The Occupational Safety and Health Administration is looking into two deaths at Amazon facilities, the most recent of which occurred in June.
SHOW TRANSCRIPT

The U.S. Department of Labor is investigating the deaths of two part-time workers at Amazon’s warehouses.

The first came in December, when a worker died from injuries sustained after getting caught in warehouse conveyor belts. A second occurred in June when a pallet jack operator was pinned by her machine. (Via CNN)

Re/code reports the Labor Department’s Occupational Safety and Health Administration is spearheading the investigation. OSHA issued findings on the December incident in a recent press release and said it had opened an investigation into the June death.

“Temporary staffing agencies and host employers are jointly responsible for the safety and health of temporary employees. It is essential that employers protect all workers from job hazards — both temporary and permanent workers.”

Additionally, the companies each face $6,000 in fines for the death — a number raising eyebrows at several outlets. (Via NBC)

“The fines seem incredibly low for companies that failed so miserably to ensure the safety of their workers that someone actually died,” wrote VentureBeat.

In its statement  on the most recent accident, Amazon said “any accident that occurs in a facility is one too many and we take these matters seriously.” (Via Los Angeles Times)

The investigations come as Amazon continues to expand. Businessweek reports the company has opened 50 new shipping warehouses since 2010, and hired 70,000 seasonal workers to staff them last year.