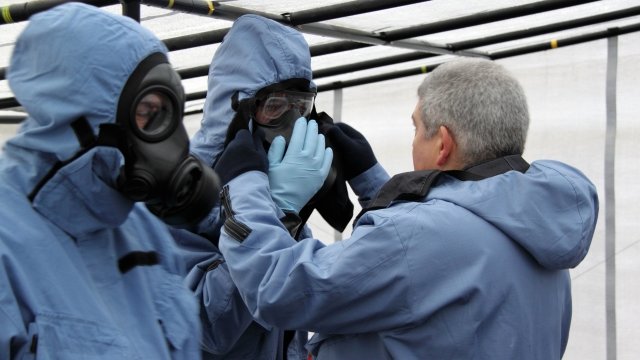 SMS
Investigators: Chlorine Likely Used In February Attack In Syria
By Ethan Weston
By Ethan Weston
May 16, 2018
The report from the Organization for the Prohibition of Chemical Weapons didn't blame any group for the use of chlorine.
SHOW TRANSCRIPT

A team of international inspectors say chlorine was likely used as a chemical weapon in Syria in February.

The Organization for the Prohibition of Chemical Weapons examined two canisters that were dropped on Saraqib, Syria in February and found they tested positive for chlorine. Areas around the cannisters were also tested.

The report notes that both cylinders were marked with CL2 to denote they contained chlorine gas.

The report comes less than two weeks after investigators finished up their trip to Douma, Syria. A suspected chemical attack there killed over 40 people in April. The OPCW hasn't issued any findings for that investigation yet.

OPCW investigators didn't blame anyone or any organization for the February attacks, but did note the city wasn't under government control at the time.