Pruitt's Resignation Doesn't Mean The Investigations Into Him Are Over 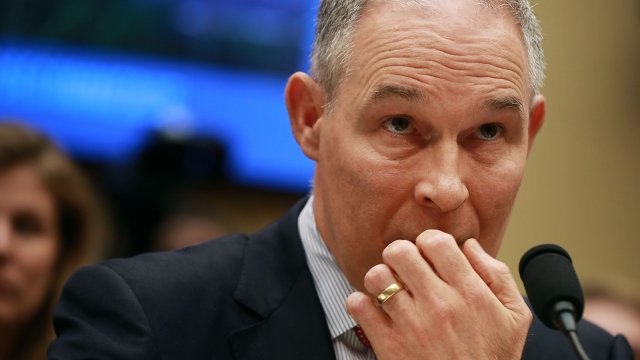 Scott Pruitt resigned as the head of the Environmental Protection Agency on Thursday. So what does that mean for more than a dozen investigations into his conduct and spending?

Ahead of his resignation, multiple media outlets reported 16 investigations linked to Pruitt. The EPA's inspector general is in charge of many of those probes. But the House oversight committee, the Government Accountability Office, the White House Office of Management and Budget, and the U.S. Office of Special Counsel all have their own probes in progress.

And it looks like at least some of those will continue. Shortly after President Donald Trump announced Pruitt's resignation, Rep. Elijah Cummings released a letter to the EPA inspector general and said the House committee's investigation was ongoing. And a Washington, D.C.-area reporter tweeted that the IG's investigation into improper travel by Pruitt will continue.

Even though he's no longer a federal employee, Pruitt could still face consequences for crimes he may have committed. For example, if any of the inspector general's investigations uncover criminal wrongdoing, that evidence will be turned over to the U.S. Attorney's Office for possible prosecution.