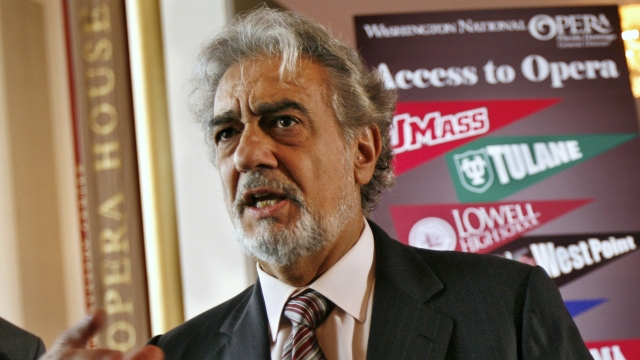 The American Guild of Musical Artists, which opened its investigation in September, concluded that "Domingo had, in fact, engaged in inappropriate activity, ranging from flirtation to sexual advances, in and outside of the workplace." The union says many witnesses were scared to come forward because of the fear of retaliation.

AGMA didn't give many details about the investigation, but the Associated Press reports investigators looked into allegations from 27 women. They reported unsolicited kissing, groping and phone calls. Some said they felt like Domingo was stalking them.

Many of the women reported they were young when the harassment started, alleging Domingo would pressure them to have sexual relationships with him in return for a chance at a job. If they denied his advances, some women allege he would punish them professionally.

Domingo said he accepts full responsibility for his actions. He said in a statement, "I respect that these women finally felt comfortable enough to speak out, and I want them to know that I am truly sorry for the hurt that I caused them," adding "I understand now that some women may have feared expressing themselves honestly because of a concern that their careers would be adversely affected if they did so. While that was never my intention, no-one should ever be made to feel that way."

AGMA says it's calling on companies in the opera, dance and choral fields to bring on a positive change in the culture. An investigation of Domingo by the Los Angeles Opera has not concluded yet. Domingo stepped down from his leadership role there last year.

Additional reporting by Jocelyn Gecker of the Associated Press