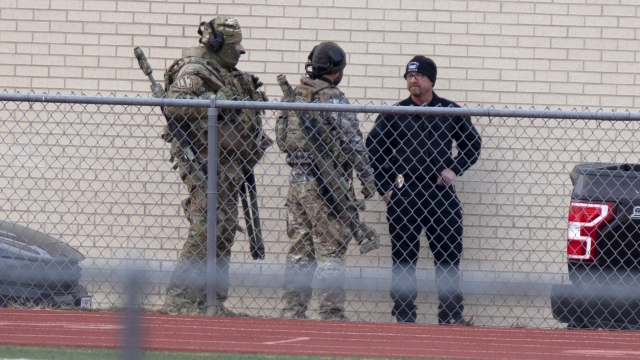 The suspect was identified as 44-year-old British national Malik Faisal Akram, who was killed Saturday night after the four hostages were released.

U.S. and British authorities Monday continued an investigation into the weekend standoff at a Texas synagogue that ended with an armed British national dead and a rabbi crediting past security training for getting him and three members of his congregation out safely.

Researchers are seeing an increase in antisemitic incidents at universities across the U.S.

Authorities identified the suspect as a 44-year-old British national, Malik Faisal Akram, who was killed Saturday night after the last hostages ran out of Congregation Beth Israel around 9 p.m. The FBI said there was no early indication that anyone else was involved, but it had not provided a possible motive.

The investigation stretched to England, where late Sunday police in Manchester announced that two teenagers were in custody in connection with the standoff. Greater Manchester Police tweeted that counter-terrorism officers had made the arrests but did not say whether the pair faced any charges.

Video of the standoff's end from Dallas TV station WFAA showed people running out a door of the synagogue, and then a man holding a gun opening the same door just seconds later before he turned around and closed it. Moments later, several shots and then an explosion could be heard.

Authorities have declined to say who shot Akram, saying it was still under investigation.

Akram could be heard ranting on a Facebook livestream of the services and demanding the release of Aafia Siddiqui, a Pakistani neuroscientist suspected of having ties to al-Qaida who was convicted of trying to kill U.S. Army officers in Afghanistan.

FBI Special Agent in Charge Matt DeSarno had said Saturday night that the hostage-taker was specifically focused on an issue not directly connected to the Jewish community. It wasn’t clear why Akram chose the synagogue, though the prison where Siddiqui is serving her sentence is in nearby Fort Worth.

On Sunday night, the FBI issued a statement calling the ordeal “a terrorism-related matter, in which the Jewish community was targeted.” The agency said the Joint Terrorism Task Force is investigating.