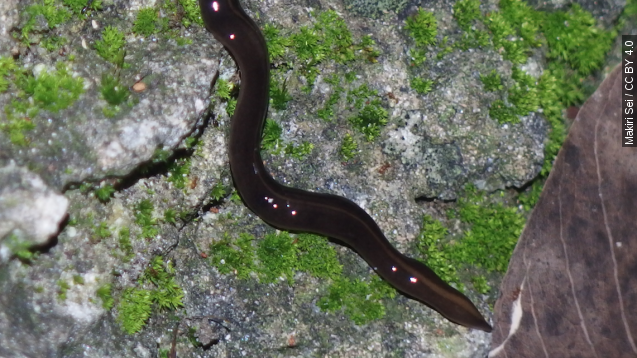 For whatever reason, most people probably don't find snails as cute as this woman apparently does. (Video via Youtube / ck12321212)

But cute or not, snails in the U.S. are facing a threat that anyone would struggle to find cute: the New Guinea flatworm.

This is a picture of the flatworm, Platydemus manokwari, and it's significant because it was taken in Florida, making it one of the first records of the flatworm in the continental U.S.

The problem for snails is flatworms are voracious snail predators, and Platydemus has the added threat of being extremely invasive. (Video via Youtube / Nico4nicola)

It's the only flatworm on the Invasive Species Specialist Group's list of the 100 worst invasive species on the planet, and its arrival in France prompted fears about the country's precious escargot.

Luckily for French chefs, the researchers say the invasion there has been mostly contained to a greenhouse in Normandy, highlighting one way the worm gets accidentally spread: plants. (Video via jardin-jardinier.com)

It's not clear exactly how it got to the U.S., but the researchers say the worm can get transported with plants and plant soil, which means they could hitch a ride on plant imports.

And the U.S. faces some unique problems when it comes to containing the invasion, as the researchers explain:

"While most of the infected countries and territories reported until now are islands, from which the spread of the species through human agency is limited by means of transportation and various business and biosecurity protocols, our new record, Florida, will not be subjected to these limitations."

If the species establishes itself in the U.S., it would pose a threat not only to snails but also to native earthworms, which are already threatened by more than 60 other invasive earthworm species. (Video via Colgate University)