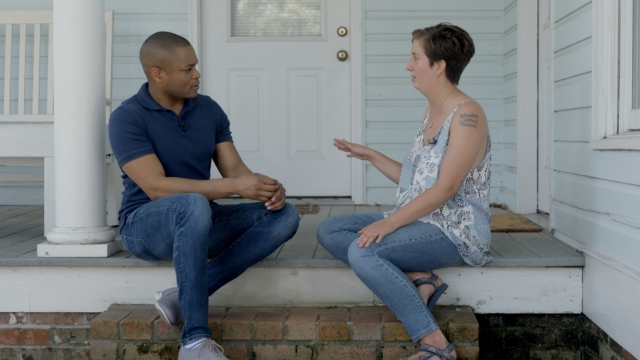 Teacher Alexandra Melnick says she's struggled to stay connected during the pandemic. Her story is perhaps one of millions for people in rural areas.

High school teacher Alexandra Melnick's day is often interrupted with a familiar routine..Getting in her car and driving less than a mile away to a friend's house for reliable internet service.

"It gets a lot better internet because they have fiber cable," Melnick said.

Dependable internet became an even bigger hurdle in rural America amid the pandemic. Melnick says she and her students struggled to stay connected during a virtual school year in the small town of Leland located in the Mississippi River Delta.

"So you have even students that kind of disappeared on you during the school year [and] during the pandemic. What was that like?"

"Yeah, so we had a few. I would say 10 percent overall of the school just disappear on us. Some of that is due to like larger systematic inequalities," Melnick said. "They just don't have the internet. And once they go home, they're gone. We can't contact them."

An estimated 42 million Americans lack access to broadband internet and Mississippi is among the bottom ten states in the nation. Expanding high speed internet to areas of the country like the Mississippi Delta is a key part of the ongoing infrastructure talks happening in Washington. And though there is bipartisan support for investing in broadband, how much and how to pay for it remains a key sticking point.

"It could take as much as 50 to 60 thousand dollars per mile for internet providers to put in the lines necessary to connect businesses and homes to the internet and that’s something they say they just can't do without federal support."

"I think that in order for our whole country to be successful, we can't leave anybody behind," Garner said. "So the rural parts of America need the connections, just like the cities do. And there are not many companies who are willing to invest in these areas because it is so costly."

TEC is part of a group of small regional and locally owned companies which work in rural areas. These types of businesses would likely benefit from any major broadband funds from the U.S. government….Garner's company has previously received federal support to build up broadband infrastructure bringing fiber internet to thousands of potential customers.

"Congress is accustomed to working on infrastructure in a bi-partisan way," said Senator Roger Wicker.

One of the key negotiators in the ongoing infrastructure talks is Mississippi Senator Roger Wicker. His staff told Newsy that efforts have been underway to expand internet access to undeserved areas, including a 10-year $20 billion dollar program to address the problem nationwide funded by the Federal Communications Commission.

Melnick says the issue shouldn't be a political battle and hopes leaders can put forward increased funding for faster speeds and more connections.

"We're leaving whole areas of a state behind and we're leaving a whole generation of students behind from a specific area," Melnick said. "And a lot of the students are Black low-income students, and that's not fair. That's going to perpetuate generational inequalities."