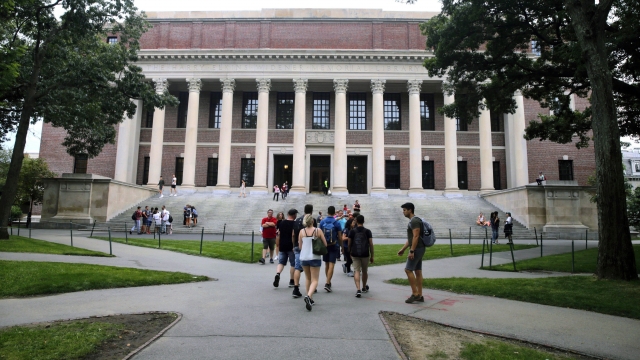 The Trump administration has announced it will revoke the visas of international students whose universities go online-only.

She came to the top-ranked Ivy League university from Mexico City, able to enroll thanks to a mix of loans and scholarship money.

But Harvard's Kennedy School is just one of dozens of American schools which have announced they will shift to an online-only format for the fall semester, which means she could face deportation under a recent Trump administration order.

“I really feel like I have no idea what to do,” Mendiola told Newsy, adding “many [international students] have terrible internet connections in our home countries."

According to the Institute of International Education, over 1 million international students studied in the United States during 2019. As schools consider going online-only to combat the spread of COVID-19, those foreign students may be kicked out of the country.

U.S. Immigrations and Customs Enforcement updated its policies Monday to revoke the status of any non-immigrant international students attending an American college which has shifted to online-only learning for the fall semester.

“To call (this citation) bad I think is an understatement,” said Woojin Lim, a Harvard College junior from Vancouver. “It’s hostility toward education and toward non-immigrants.”

Harvard University provided Newsy with a statement from President Larry Bacow, calling the change  “a blunt, one-size-fits-all approach to a complex problem”  and acknowledging it leaves foreign students “few options beyond leaving the country or transferring schools.”

In a House subcommittee hearing on COVID-19 and higher education on Tuesday, the issue was raised by Sean Harper, executive director of the USC Race and Equity Center.

Schools are faced with a tough choice, too.

But making the decision to open could potentially cause students to be infected with COVID-19.

“There are so many unknowns currently going on,” said Vijay Chidambaram, an assistant professor of computer science at UT Austin. “If my students go out of the U.S. at this time, it's not clear that they’d be able to come back and continue their education.”