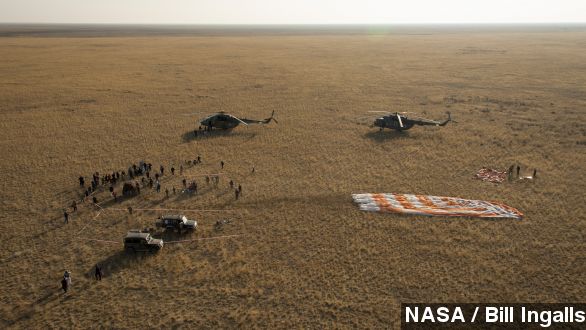 By Evan Thomas
September 11, 2014
The three-man crew touched down in Kazakhstan Wednesday after more than five months of science experiments in orbit.
SHOW TRANSCRIPT

Three crew members of the International Space Station Expedition 40 returned to Earth Wednesday after a 169-day stay in orbit.

NASA astronaut Steve Swanson and Russian cosmonauts Alexander Skvortsov and Oleg Artemyev touched down in a Soyuz capsule in Kazakhstan.

By the end of their six-month mission, they'd traveled more than 71.7 million miles and completed more than 2,700 orbits around Earth.

EURONEWS: "During their time on board the International Space Station, the returning crew tackled a record number of science experiments, upgraded Robonaut — the station's humanoid robot — and repaired broken equipment."

"We did a lot of maintenance, which is good and bad," CBS quotes Swanson as saying. "I love doing maintenance, but it means things broke."

The crew also conducted microgravity physiology and human health research to gather data on long-duration space flight. U.S. and Russian space agencies are planning to send two crew members to the ISS for an entire year in 2015. (Video via NASA)

To date, the longest single mission to the ISS was 215.4 days, when Soyuz TMA-9 carried an astronaut and a cosmonaut to orbit. The mission lasted from October 2006 to April 2007.

The ISS itself has been continuously occupied since 2000. Right now there's a three-person crew aboard the ISS, which will expand to six astronauts and cosmonauts after the launch of the next Soyuz capsule Sept. 25. (Video via NASA)