In Denver, There's A Church For Marijuana 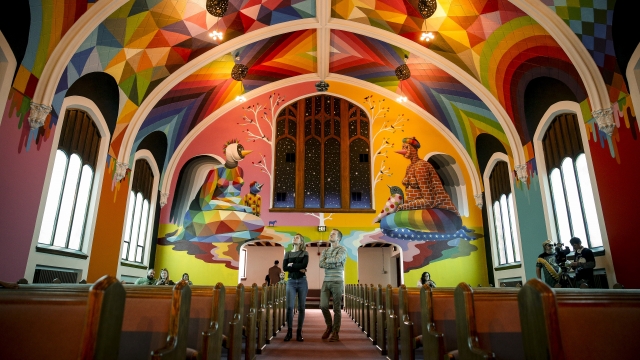 SMS
In Denver, There's A Church For Marijuana
By Ryan Biek
By Ryan Biek
April 24, 2017
The International Church of Cannabis opened its doors on 4/20 despite efforts from a legislator to block it.
SHOW TRANSCRIPT

Is marijuana a religion? Apparently, it is in Denver.

The International Church of Cannabis recently opened its doors despite some pushback by a public official.

Following no clear-cut dogma, the church describes itself as a place for those who "ritually take the sacred flower to find inspiration and meaning."

"It's really just meditating and finding yourself. It's kind of having your own mind and believing and going with it," a churchgoer told KMGH.

Since the church opened on 4/20, worshippers have been allowed to smoke inside the building, but only during private, invitation-only events. The city axed the church's original plans to allow the public to take part.

But Dan Pabon, a Democratic state representative, wants to go further. He accused the church of "leveraging usage laws" and tried to push an amendment that would make it illegal to smoke in churches.

One of the church's founders accused Pabon of religious persecution, arguing people in Denver can already smoke anywhere.

But some note that's not exactly true. Denver does ban pot in public places. The city has a mixed bag of regulations that officials have said are unpredictable.

For Pabon's part, he's hoping the state Senate takes up the issue soon.