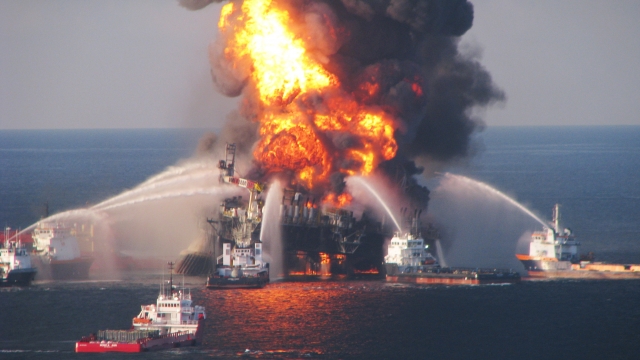 SMS
Interior Dept. Announces Roll Back Of Rules Created After BP Oil Spill
By LeeAnne Lowry
By LeeAnne Lowry
May 3, 2019
The revisions impact roughly 20% of the "Well Control Rule" put in place after the 2010 BP rig explosion.
SHOW TRANSCRIPT

The Trump Administration announced a rollback of Obama-era offshore drilling regulations on Thursday.

The "Well Control Rule" was put in place after the Deepwater Horizon oil spill in 2010, which was caused by a BP rig explosion. It killed 11 people and leaked four million barrels of oil into the ocean. It's considered the worst oil spill in U.S. history.

After the disaster, then-president Barack Obama criticized the agency in charge of drilling permits for allowing oil companies to conduct their own inspections and write their own regulations.

Obama said in a speech, "So one of the lessons we've learned from this spill is that we need better regulations, better safety standards, and better enforcement when it comes to offshore drilling."

But the current Interior Department calls parts of the Well Control Rule "unnecessary burdens." The changes impact roughly 20% of those regulations.

The revisions are highly technical, but one of the more controversial changes allows rig operators to hire third-party inspectors, instead of government ones, to check safety equipment.

According to the Bureau of Safety and Environmental Enforcement, most of the the comments received during public review were against the changes. Still, it defended them, saying some of the original rules didn't increase safety and that removing them would reduce costs for the industry.

The new changes will take effect in two months.