Interest Rates Will Rise In 2015 — If Economy Stays Up 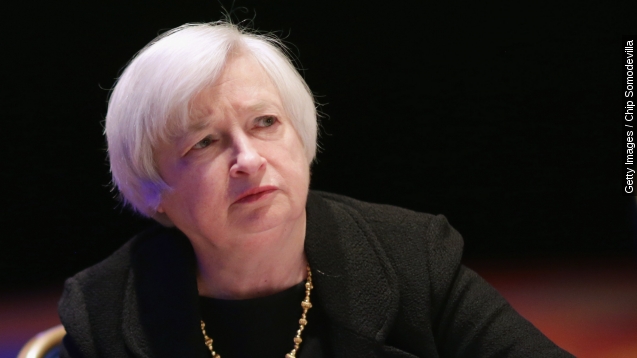 SMS
Interest Rates Will Rise In 2015 — If Economy Stays Up
By Jake Godin
By Jake Godin
May 22, 2015
Federal Reserve Chair Janet Yellen's speech at the Greater Providence Chamber of Commerce indicated interest rates will be going up some time in 2015.
SHOW TRANSCRIPT

What does Janet Yellen's most recent speech mean for the market?

Federal Reserve Chair Janet Yellen's speech Friday on the economic outlook of the U.S. indicated interest rates are still going to go up this year as planned, as long as the economy improves.

"With oil prices no longer declining and with the public's expectations of future inflation apparently stable, my colleagues on the federal open market committee and I believe the consumer price inflation will move up to 2 percent as the economy strengthens futher," Yellen said at Friday's press conference.

Analysts have been expecting a hike, as officials have been saying for years that rates eventually must rise. But until now, no one knew if the rates would go up in 2015 or later.

And, of course, Wall Street is very sensitive to interest rate changes.

Just the mention that equities were highly priced in a May speech by Yellen was enough to cause some waves in the market at the time.

And that puts the Fed in a tough spot. One analyst told Bloomberg that the Fed is essentially stuck between a rock and a hard place on raising interest rates.

"I think the Fed is trapped. They're painted into a corner. … Now you're in a situation where they need to raise rates, we have to restore income to the system … and at the same time we don't see the growth that they want to see to validate that change," Kroll Bond Rating Agency Senior Managing Director Chris Whalen said on Bloomberg.

With interest rates going up sooner rather than later, that means the Fed must at least be somewhat comfortable with how the U.S. economy is doing and believe it can handle a rise in interest rates.

The market was stable after Yellen's speech, with Standard & Poor's 500, the Dow Jones industrial average and the Nasdaq composite all virtually unchanged.