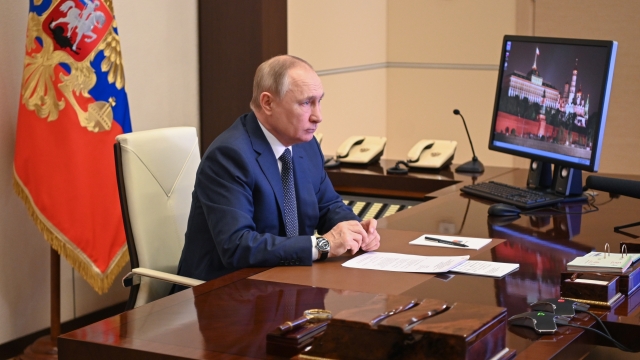 SMS
Intelligence Leaders Discuss Putin's State Of Mind As War Continues
By Sasha Ingber
By Sasha Ingber
March 8, 2022
The intelligence community assesses that Putin is angry because of strong Ukrainian resistance and the West's deep support.

What is Vladimir Putin thinking? That persistent question inside the intelligence community is taking on new urgency as Russia's lethal assault on Ukraine continues.

"He's been stewing in a combustible combination of grievance and ambition for many years," Burns said.

Burns says now Putin is waging war on Ukraine based on a number of false assumptions.

"First: That Ukraine, in his view, was weak and easily intimidated. Second: That the Europeans, especially the French and Germans, were distracted by elections in France and a leadership succession in Germany and risk averse. Third: He believed he had sanctions-proofed his economy in the sense of creating a large war chest to foreign currency reserves. And fourth: He was confident that he had modernized his military and they were capable of a quick, decisive victory at minimal cost."

Intelligence leaders say this war is about perceptions.

Director of National Intelligence Avril Haines told lawmakers Tuesday Putin is fueled by the conviction that the West doesn't give him enough respect and he underestimated how the world would respond to Russia's invasion.

"We judge that he did not anticipate either degree to which the United States and its allies and partners would take steps to undermine his capacity to mitigate western actions or the pullback from Russia initiated by non-state actors in the private sector," Haines said.

Today, the intelligence community assesses that Putin is angry because of strong Ukrainian resistance and the West's deep support. U.S. officials believe he won't be able to install and hold a pro-Kremlin regime in Kyiv.

They also think he has no sustainable, political endgame — a factor they fear could make him even more dangerous.

"We assess Putin feels aggrieved the West does not give him proper deference and perceives this is a war he cannot afford to lose," Haines continued. "But what he might be willing to accept as a victory may change over time given the significant costs he is incurring. "