Why The U.S. Is Warning Of Russia's False Flag And Fake Video Plans 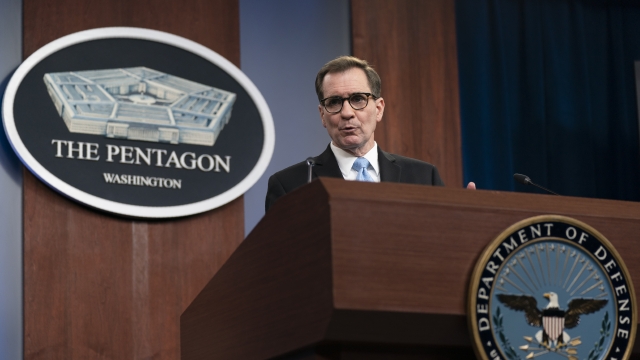 SMS
Why The U.S. Is Warning Of Russia's False Flag And Fake Video Plans
By Sasha Ingber
By Sasha Ingber
February 9, 2022
The National Security Council tells Newsy disclosures are meant "to deny Russia the opportunity to use these lies to justify an invasion of Ukraine."

It's a standoff between a former KGB officer, Russian president Vladimir Putin and a former comedian and actor, Ukrainian president Volodymyr Zelenskyy.

"Russia is laying the groundwork to have the option of fabricating the pretext for an invasion," National Security Advisor Jake Sullivan said.

This kind of intelligence is being shared by the Biden administration in near real-time.

A spokesperson for the National Security Council tells Newsy the disclosures are meant "to deny Russia the opportunity to use these lies to justify an invasion of Ukraine."

NEWSY'S SASHA INGBER: Would you say these declassifications are helping to prevent a Russian incursion into Ukraine?

PAUL KOLBE: It's too early to say whether it's going to prevent an incursion. Forces continue to build up and nobody knows yet whether Putin is going to decide to invade. But it's clear that there's an information warfare game going on.

Paul Kolbe led the CIA's Russia operations. He says exposing Moscow's plans now helps discredit its excuses for actions taken later. He's confident the U.S. intelligence community is carefully assessing what it shares to protect sources and methods since Russia's security services could use it to modify their operations.

"They will be looking to try to find out the source of that leak," Kolbe said. "They will try to close it. And that's one of the risks of using intelligence information in an information war."

The U.S. warnings range from false flags to fake videos.

"We have information that they've pre-positioned a group of operatives to conduct what we call a false flag operation," Pentagon Press Sec. John Kirby said.

"When it comes to false flags, Russia is unambiguously the past master of using them, deploying them," he said. "The Kremlin has used them in the past during the Cold War in order to use them as a pretext to military intervention in countries in its so-called near abroad. And it's done so in order to shore up its security in those countries and in some cases, install pliant leaders."

Recent British intelligence warned that the Kremlin is trying to install a pro-Russian leader in Kyiv. Still, the disclosures have brought skepticism of officials' assertions.

Obtaining records for a deep understanding of the moment can take decades.

Officials in Russia continue to deny there are plans to invade Ukraine.