Why The US Is On High Alert Over Iran 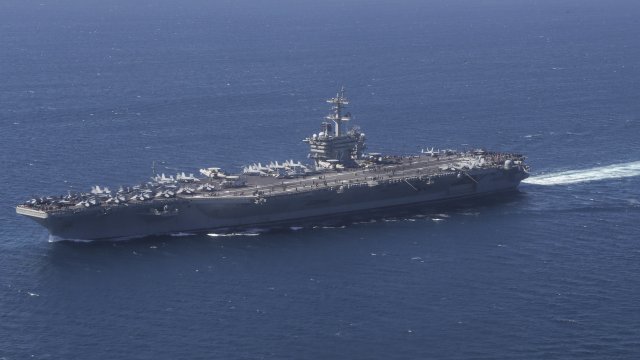 SMS
Why The US Is On High Alert Over Iran
By Matt Picht
By Matt Picht
May 9, 2019
The U.S. is ratcheting up its military presence near Iran after intelligence reports suggested an attack on U.S. forces might be imminent.
SHOW TRANSCRIPT

The U.S. decision to beef up its military presence near Iran was reportedly made in response to an Iranian threat to attack U.S. forces in the region.

Multiple outlets report the U.S. has intelligence that Iranian officials have green-lit their proxy groups to attack U.S. targets. The country was also possibly moving short-range missiles around by boat.

Those details don't show Iran has any new capability to target the U.S. — but they could indicate Tehran is willing to start using what forces they do have to stage attacks on U.S. personnel.

The U.S. has thousands of troops in the region, including about 2,000 troops stationed in Syria and 5,000 in Iraq. Those soldiers could be targets for one of the many militia groups Iran uses as proxy forces.

In response to the potential threat, the U.S. fast-tracked a scheduled deployment of the U.S.S. Abraham Lincoln aircraft carrier, and is sending a group of heavy bomber planes to the region. That might give Iran pause before ordering an actual attack.

The tension comes as Iran has issued a new ultimatum about the international agreement which limits its nuclear program. The country says it plans to abandon some of those limits within 60 days unless it gets some form of relief from punishing U.S. economic sanctions.