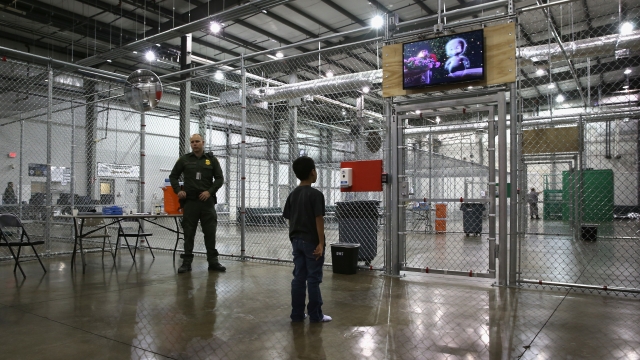 A report from the inspector general's office in the Department of Health and Human Services shows some migrant children who were in HHS custody experienced severe trauma. It said some kids experienced trauma and direct threats, either in their home country or by their journey to the United States. And they experienced more issues, including feelings of abandonment and post-traumatic stress if they were separated from their parents during the Trump administration's "zero tolerance policy."

Wednesday's report says investigators visited 45 facilities across 10 different states from August to September of 2018. The OIG said the facilities "struggled to address the mental health needs of children who had experienced intense trauma and had difficulty accessing specialized treatment for children who needed it."

In the report, program directors and mental health clinicians said children who didn't understand why they were separated from their parents had high levels of mental distress. Some were angry and confused because they thought their parents abandoned them and some were guilty and scared for their parents' well-being.

One of the program directors shared a story of a 7 or 8-year-old boy who was separated from his father with no explanation. He thought his father was killed and that he would be next. The little boy was in such a mental health distress, he needed emergency psychiatric care.

A medical director spoke to how these traumas can turn into physical symptoms manifested by psychological pain. "You can get a lot of 'my chest hurts,' even though everything is fine [medically]." The medical director said emotional pain was described as "every heartbeat hurts" and "I can't feel my heart."

The report says these traumatic experiences of separated children made it that much more difficult for the facilities to make therapeutic relationships to address mental health needs. A program director said the children were "terrified" and saw any facility staff member as "the enemy" because they couldn't distinguish them from immigration agents.

During this investigation, nearly 9,000 children were in shelters. The report found the mental health staff at the facilities were overwhelmed. Usually, one clinician is assigned to counsel 12 children. But, at the time, there was one clinician assigned to 25 children, which meant less time to actually counsel them.

The Office of Refugee Resettlement is in charge of meeting the needs of these children. In Wednesday's report, the OIG made six recommendations for the Administration for Children and Families, which oversees the ORR. The recommendations include working with qualified mental health experts who can identify and provide tools to help the staff, increase therapeutic placement options for children who need intense care and minimize the amount of time spent in ORR custody.

The Administration of Children and Families agreed with all of the recommendations. It said it's already working on the majority of those, which addresses improving ORR's mental health services. But the ACF said it is facing challenges when it comes to expanding the number of therapeutic placement options, which caters to children with behavioral issues.

And these issues could cause health concerns when they get older. One child psychiatrist told the AP that the severe trauma some of these kids experienced could turn into more severe mental or physical challenges later on.