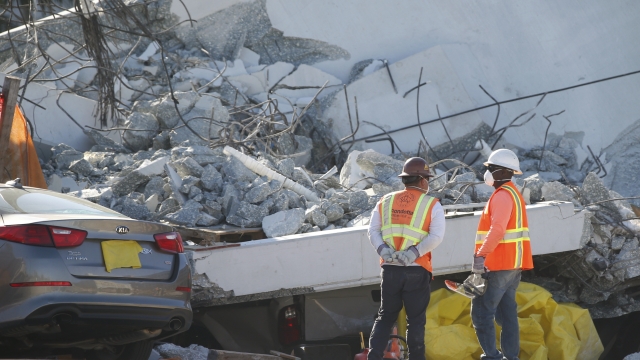 The vigil continues for anxious family members in Florida.

“It feels like the twilight zone kind of, it’s just very eerie and sad,” said nearby resident Grace Terrell.

They're still waiting to hear about their missing loved ones from the collapse of an ocean-front condominium tower.

“I feel very sad inside because just    --knowing the feeling of everyone that we lost or we can’t find, it just breaks my heart," said Surfside resident Maria Gonzalez.

And with more time passing and the search for survivors continuing,

"It has to be very slow processes where we're digging through searching, shoring up certain areas, other aspects," Miami-Dade Fire Chief Alan Cominsky said.

...More information is coming out about structural concerns about the building before the tragedy.

Newly released documents from the city of Surfside show the condo tower had "major structural damage" to a structural slab below its pool deck. That report, from 2018, said it needed to be extensively repaired, though it didn't warn of imminent danger from the damage.

The report was released as rescuers continue to dig through the rubbled remains Saturday, as 159 people still remain unaccounted for after the collapse that killed at least four people.

"They continue to, to believe that there are people that they can reach," Mayor Cava said.

The report said failed waterproofing caused the damage to the slab, and that failure to replace the waterproofing could cause the concrete to deteriorate exponentially. It also pointed out "abundant cracking" of columns, beams and walls in the parking garage.

"Usually a collapse like this doesn't happen just because of one factor. Usually several factors is combined and it's like a perfect storm."

Electrical *and structural inspections were recently done as part of a 40-year recertification process that all businesses have to do, with engineers at the site just this week doing roof work. But cement and concrete repairs hadn't been done yet.

Now instead of inspections or repairs, crews search for survivors or victims. Machines, drones and cranes hover over the rubble of the former 12-story building, with firefighters still dealing with billowing smoke.

“There was just a firefighter in my lobby who said I haven’t slept in two days and his eyes were bloodshot and he was soaked from the rain,” Terrell said.

Gov. Ron Desantis said a "definitive answer" is needed soon. And while officials work to uncover how the collapse happened, others are just hoping to they can be reunited with family members still missing.