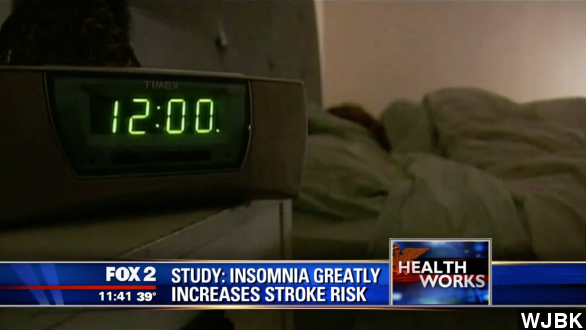 By Danny Matteson
April 4, 2014
According to a large four-year study, insomnia sufferers are 54 percent more likely to suffer a stroke than their sound-sleeping peers.
SHOW TRANSCRIPT

We all know not getting a good night's sleep can be bad for your health, but a new study says it might be worse than we think — increasing the risk of stroke by more than 50 percent.

According to a large four-year study out of Taiwan, those who suffer from insomnia are 54 percent more likely to suffer a stroke than their sound-sleeping peers. (Via WJBK)

And, perhaps surprisingly, the odds are worse for younger people, with 18- to 34-year-old insomniacs showing an eight-fold increase in stroke risk compared to those not suffering from insomnia. (Via KAUZ)

Quoted by Fox News, the study's author said: "Despite the fact that insomnia is one of the most common sleep complaints, it is often perceived merely as a symptom of another disease or as a side effect. People should pay more attention to monitor their insomnia symptoms."

The study looked at the randomly selected health records of more than 80,000 people in Taiwan. The researchers found about one-fourth of people selected were insomniacs and that stroke risk tends to be higher in people who experienced insomnia more often or for a longer period of time.

HealthDay writes, "People who suffered persistent insomnia had a higher risk of stroke than people with intermittent insomnia, and both groups were at greater risk than people whose insomnia stopped during the study."

Despite the frightening numbers, though, The Huffington Post reports the researchers are slow to declare a cause-and-effect relationship between insomnia and stroke — though they do note that insomnia can "affect health via inflammation, blood pressure and glucose tolerance."

And there is other research that points to a sleep-stroke connection.

As Time reported back in 2012, a similar study from the University of Alabama in Birmingham found that adults who slept less than six hours per night were four times more likely to have a stroke.

Researchers note that anyone experiencing chronic insomnia should seek treatment. Their findings were published in the American Heart Association journal Stroke.