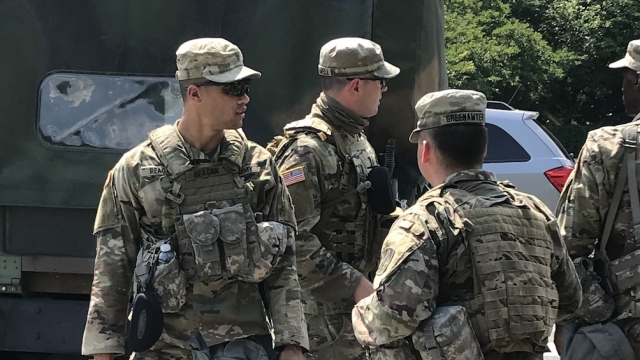 SMS
National Guard's Crackdown In D.C. Cost At Least $21 Million
By Patrick Terpstra
By Patrick Terpstra
June 16, 2020
Newsy's investigative team has been looking into the federal crackdown on protests in Washington earlier this month.
SHOW TRANSCRIPT

Newsy is learning more about the National Guard’s controversial mission in Washington responding to intense protests and looting near the White House this month.

The Defense Department deployed 5,100 National Guard troops from 11 states and the District of Columbia to protect the city at a cost of $21.1 million, National Guard spokesman Maj. Robert Perino told Newsy.

The price tag is likely higher because it does not include the cost of aircraft used to transport troops, Perino said.

The cost for each guardsman was $531.48 per day and covered pay, travel and accommodations.

“Many of us here feel the same thing folks out there protesting are feeling, too,” Maldonado said. “So our job is to ensure we protect people, protect property, allow folks to keep doing those things. That ensures our democracy and our way of life.”

He showed a Newsy crew around the sprawling armory two blocks from the U.S. Capitol where the troops collected riot gear and, initially, weapons.

“Some folks were armed,” he said, “but no weapons were fired.”

Sen. Chris Van Hollen said the Guard’s presence was a waste of money that inflamed tensions in the city.

“The whole thing was a show by the president,” Van Hollen said. “You had the secretary of defense talking about the battlespace. I mean this was ridiculous, the battlespace against peaceful protesters in the District of Columbia.”

Van Hollen said the Trump administration should have listened to the mayor, who wanted local police to handle the unrest.

Out-of-state guard members have gone home now with a few hundred D.C.-based troops still on the ground to help with traffic control and any protests that might become violent, Maldonado said.