Behind Bars: Inside The Country's Largest Mental Health Hospital 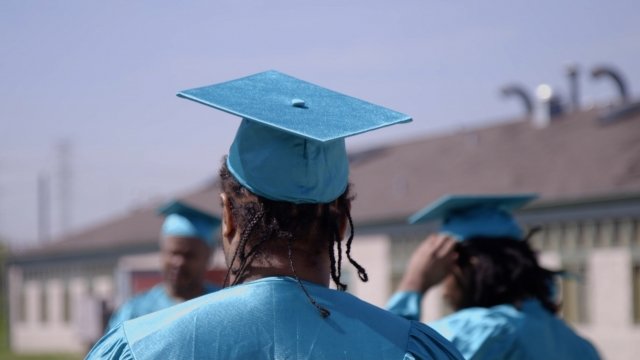 Cook County Jail in Chicago houses a little over 6,000 inmates on a daily basis. More than 30 percent of those inmates have some sort of mental health issue.

"If ever there is a statement of just how screwed up our society is, I'm running arguably the largest mental health hospital in the country. And I'm a history major. And that's not how it's supposed to work," Cook County Sheriff Tom Dart said.

Sheriff Dart, who runs the jail, recognized the mental health problem inside his facility early on. He set in motion a complete overhaul of what was the country's largest single-site jail — with a keen eye on the mentally ill.

Much of the sheriff's reforms around mental illness stem from the Mental Health Transition Center. MHTC had its first class of inmates in August 2014.

Dr. Nneka Jones Tapia is a psychologist who has worked in Chicago corrections for nearly 12 years. In 2015, she was named warden of Cook County Jail, making her the first mental health professional in the U.S. to head up a prison or jail, according to the Cook County Sheriff’s office.

"The sheriff had this area of the jail that's on the jail campus, but it's outside of the traditional jail walls. … And so he asked me what I could do with the space. And, you know, we created something pretty powerful there," Tapia said.

"If that was me, what would I want? And everything we've done from there sort of flowed through just that basic concept," Dart said.

Sheriff Dart and Dr. Tapia took this open space and filled it with a robust set of programs including medical insurance enrollment, job training, therapy sessions, discharge planning and more.

"We really wanted to be thoughtful about offering resources that they needed in order to transition appropriately back into society and hopefully not return," Tapia said.

Since 2014, approximately 375 male detainees have graduated from the MHTC program. And while we don't know the recidivism rate among these graduates, we do know overall reforms across the jail coupled with county bail reform has led to a significant dip in population. Over the past four years, Cook County Jail has seen its daily population fall from about 9,000 inmates in 2014 to 6,000 today.

"This program here, it … wants you to make a living, wants you to live. It's thinking for change, that's the whole concept," Fred Owens, an inmate at Cook County Jail, said.

"So coming in here, instead of looking at it as a bad thing … I took it as a chance to dig deep into my past, you know, and confront all my demons and things that's been hindering me these past couple of years of my life," Marcus Wilkins, another Cook County Jail inmate, said.

"It's good to see because I'm not too far behind them. It's like one day I could finally be doing this. … Finally completing something because that's something I never did in my life in programs. I never completed programs," Owens said.

"That was a challenge to get people to understand that we aren't just this sort of holding place and we just turn people in. I was like, no, no, we're going to use this time when they're with us to try to make things better," Dart said.

"Many of the individuals, particularly black and brown individuals that we were getting in the jail, were coming from long histories of trauma. And if we're going to talk about correcting behavior, and if we're going to talk about rehabilitation, we have to also take a look at what we as society has done to groups of people. … We recognize that we were doing things wrong in the community for so long that if they were going to come to us, then we were going to do all we could to help them to succeed," Dr. Tapia said.

"Programs like this, they're designed to help you become a better person. They challenge the way you think and your core beliefs. … I wish a program like this was around earlier because I probably wouldn't be in here talking to you, you know what I'm saying?" Wilkins said.

The jail's latest effort is a "Supportive Release Center" stationed a few blocks from the facility. The small trailer is specifically for those who were recently released from jail, giving former inmates a place to sleep, eat or make a quick phone call the night of their release.