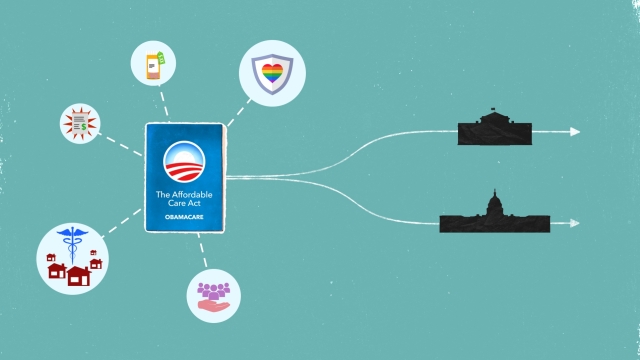 For years, President Trump and Republicans in Congress sought to strike down the Affordable Care Act. But now, the political landscape has flipped: President Biden has made expanding the health care law a top priority.

"Beginning on Jan. 20, the Vice President-elect Harris and I, we're going to do everything in our power to ease the burden of health care on you and your families," Biden, then the president-elect, said in November during a speech in Delaware.

For the 46th president, that means building on the Affordable Care Act, commonly known as Obamacare. His plan includes expanding Medicaid to offer greater health care to low-income Americans; putting an end to "surprise billing" for medical costs; lowering the cost of prescription drugs; re-establishing nondiscrimination protections for LGBTQ people that Trump had stripped away; and adding a "Medicare-like" public option.

These health care changes could take one of two routes available to every president: Executive orders or legislation. The latter requires working with a divided Congress, and that won't be easy.

"We have a Democratic majority in both the House and Senate now, but it will only be a 51-50 [vote] when we have Vice President Kamala Harris as the tiebreaker. That's not enough, without filibuster reform, to pass wide, sweeping health care reforms," explained Valarie Blake, a health law professor at West Virginia University.

Despite Democrat control in both chambers, 60 votes are needed to pass almost all legislation in the Senate. One way to get around this is an obscure budget procedure called "reconciliation," which allows legislation to pass with a simple majority, or just 51 votes.

Of course, the more immediate way the president could take action is through an executive order. This is what his predecessor, Trump, used to erode key elements of the ACA.

"We did the largest tax cut in our history. We — I hate to say this — we repealed Obamacare because we got rid of the individual mandate, which was terrible," Trump said in 2017, celebrating the the passage of a $1.5 trillion tax cut. He wrongly claimed Republicans "repealed" Obamacare.

Under Trump, the ACA's individual mandate was eliminated. States were allowed to add "work requirements" to Medicaid. Marketplace subsidies were cut. Funding to help people sign up for insurance was limited, and advertising to promote enrollment was slashed.

"The Trump administration has done some great damage to the framework of the Affordable Care Act," former Health and Human Services Secretary Kathleen Sebelius told Newsy. "Lots of issues have been promulgated by executive order or rule and reg that make the framework of the law shakier than it should be."

Just hours after taking the oath of office, President Biden signed 17 executive orders, and though none included reversing various Trump actions that experts say undermined the ACA, he called on Congress to expand the ACA's premium subsidies through the end of September in his proposed $1.9 trillion coronavirus relief package.

But that's not to say President Biden will reverse all of Trump's health actions, like an HHS rule that requires almost all private health insurers to publicly disclose negotiated rates and cost-sharing estimates.

And another possible set back to President Biden's ACA expansion efforts: the Supreme Court. In 2017, Republicans passed a massive tax bill, which eliminated the ACA's individual mandate. That led to California v. Texas, a lawsuit over the constitutionally — and fate — of the entire ACA, which is pending before the Supreme Court. A decision is expected this year.

"If Congress, for instance were to put the penalty back for the individual mandate, even if they just create a penalty that's a nominal amount, that would moot the lawsuit and make sure that the Affordable Care Act is saved," explained Wendy Netter Epstein, a professor of law at DePaul University and and the faculty director of the university's health law institute.