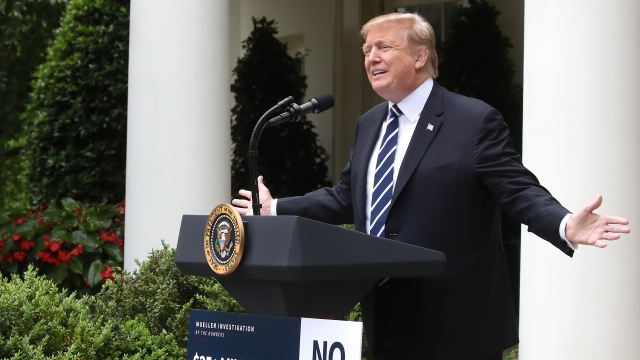 Congressional Democrats didn't have a long list of things they could work with the president on. Infrastructure was one of them. Not anymore.

Just after House Speaker Nancy Pelosi said she believed the president is engaged in a cover-up, she and Senate Minority Leader Chuck Schumer arrived at the White House for a follow-up meeting on a possible infrastructure deal. The two sides had agreed on a $2 trillion plan, with 80% of that from the federal government and 20% from local governments, and they were scheduled to discuss how to pay for it Wednesday. All that, the speaker says, went out the window before the meeting truly even started.

Democrats say they brought a 35-page detailed plan to discuss, but the meeting lasted only a few minutes — enough time for the president to vent, then leave. Shortly after, both sides spoke out. The president, speaking from the Rose Garden, told reporters he can't work with Democrats now.

"And I told Sen. Schumer, Speaker Pelosi, I want to do infrastructure. I want to do it more than you want to do it. I'd be really good at that. That's what I do. But you know what? You can't do it under these circumstances. So get these phony investigations over with," the president said.

This isn't the first time a president has been investigated while working with Congress. In fact, President Richard Nixon signed a handful of bills, including the Federal-Aid Highway Act of 1973, while under investigation. But President Bill Clinton did not sign any bills during the five weeks his impeachment trial was underway, largely because Congress was focused on the proceedings. Now, both sides are digging in as nearly 30 House Democrats are calling for impeachment proceedings to begin.