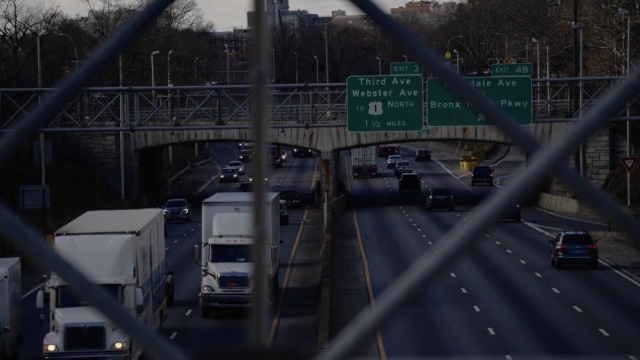 The Biden Administration's $1.9 billion infrastructure bill is nothing short of massive. It will appropriate money to address broadband access, public transit, the electrical grid, electric cars, and clean drinking water.

One of the areas that got the largest amount of funding ($110 billion) are roads and bridges, and not just in the ways some might assume, like filling potholes, building new highways, and paving new roads.

A large amount of the money will go toward improving the impacts of highways and roadways on communities of color.

"Out my door, every day, I'm seeing 18-wheelers sort of barreling through my neighborhood," said David Shuffler, a lifetime resident of the Bronx.

Since its construction in 1955, the Cross Bronx Expressway, an extension of I-95 that passes through the northern New York City borough, has plagued those who have lived near it with noise and pollution.

When the nation's interstate system was constructed during the same time, many affluent white neighborhoods across the country were spared the construction of new highways. Instead, communities of color, which oftentimes had little local political sway, were chosen to bear the burden.

"I'd leave in the morning and there'd be a film on the window, and I'd clean this film off, and by the time I'd come home from work that film would be there again," said Nilka Martell, another lifetime resident of the Bronx. "It wasn't until years later that I realized that was the exhaust from the vehicles that are traveling across the Cross Bronx."

Soot from vehicle pollution is still visible on buildings that surround Martell's home. In the mid-2000's she started Loving the Bronx, a community group that forced equity in a battle where it felt it had none.

First, came pressure on local politicians, then a park renovation, then another, and now, the group has landed a $2 million investment from the new Infrastructure Bill to see if the Cross Bronx Expressway can be capped so parks and homes can be built on top of it.

It is a move other cities like Boston, Seattle, and Denver have already taken on their interstates as they lower the highways below ground and "cap" it, allowing neighborhoods to reconnect.

The National Center for Biotechnology Information found in the long run, lives and money are saved through capping projects as there are fewer accidents, better air quality, and more outdoor activity.

"When, in 2016, we were advocating for this, everybody thought we were crazy," said Martell. "You know, we'd speak to local politicians and other community leaders and they're like absolutely not. We're looking at it, you know, not just as capping a highway, but the potential of really transforming the Bronx."

The $2 million will go toward feasibility studies to see how much of the Cross Bronx Expressway would be able to be capped, how much money it would cost, and how much time it might take.