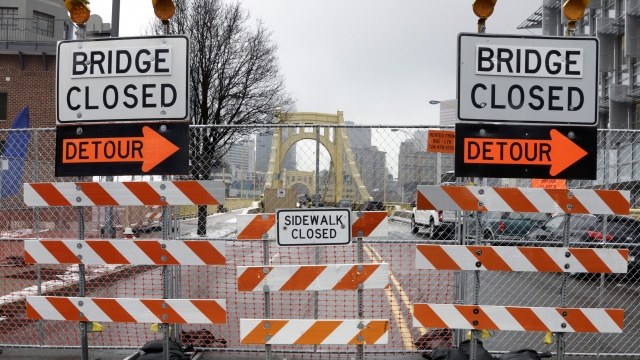 There's no question the country needs a major investment in infrastructure. And one of the areas in most need is the nation's aging and crumbling bridges.

"Passage of the infrastructure investment and JOBS Act allows us to provide funding that has been elusive for many, many years," Sen. Bob Casey said.

The bipartisan infrastructure bill includes $550 billion in new spending over the next five years, and $36.7 billion will go toward bridge repair and replacement.

The American Road and Transportation Builders Association says it'll cost nearly $42 billion to fix them all.

A bridge that crosses the river near downtown Charleston, West Virginia, is one of over 1,500 bridges across the state listed in "poor condition." But a "poor" rating does not mean the bridge is unsafe.

"If a bridge in West Virginia is unsafe, that bridge is closed, or that bridge is posted for a weight limit that would make it safe," said Jimmy Wriston, deputy secretary at West Virginia's Department of Transportation. "And that is absolutely the truth."

West Virginia has a higher percentage of "poor"-rated bridges than any other state. Newsy reached out to the other states ranked two through 10, and nearly all the officials we talked to shared the exact same message.

"Just because it says poor condition does not mean that it's not safe," said Larry Shifflet, deputy secretary for planning at the Pennsylvania Department of Transportation. "If it wasn't safe, it would be closed."

"The bridges in Maine are safe," said Joyce Taylor, chief engineer at Maine's Department of Transportation. "We have a really robust bridge inspection program."

Bridges are evaluated based on their substructure, superstructure and deck. The federal highway administration gives each of those elements a rating from zero to nine, and those three numbers are combined to categorize the bridge as good, fair or poor. If any one of those three elements gets a four or lower, the entire bridge is deemed in "poor" condition.

"If the deck had a few potholes in it, and it's rated poor, the whole bridge is poor," Wriston said.

If a bridge is so unsafe that it's closed, that can cause huge headaches for drivers who rely on it every day. And when a bridge fails, the results can be can devastating.

The influx of money from the bipartisan infrastructure bill should help officials prevent either of those scenarios from happening.

"If you believe what you're reading, there's going to be so much money that I don't think you really have to have a top priority — there'll be enough money to go around," Taylor said.

But new funding won't necessarily go to the biggest or busiest bridges first.

"You have to make sure you're addressing the rural bridges," Shifflet said. "And oh, by the way, you likely shouldn't have some of them weight restricted, so you can have the tractor trailers get across to the farm to get the milk to bring the milk back, (and) the logging industry in Pennsylvania is very big."

West Virginia and Rhode Island use an asset management system that analyzes statewide data to figure out where they can get the most bang for their buck.

"If I have a bridge with a poor deck and the substructure and the superstructure are good, then I could literally model a scenario to where I say, 'OK, if I replace the deck in two years, I could stretch the life of this bridge,'" Wriston said

The additional federal funds can also help states keep up with bridge maintenance and preservation, and that can prolong the life of existing bridges and save money in the long run.