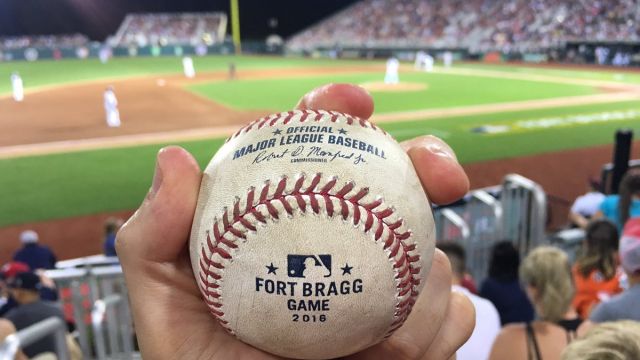 SMS
Infamous Ball Hawk Criticized For Crashing Military-Only MLB Game
By Matt Moreno
By Matt Moreno
July 4, 2016
Zack Hample said he got a ticket to the game from a friend and gave most of the balls he caught to kids.
SHOW TRANSCRIPT

A guy who makes a living collecting baseballs at MLB stadiums drew the ire of the internet when he attended a military-ID-only game at Fort Bragg.

On Sunday, the Miami Marlins and Atlanta Braves met at the one-night-only ballpark on the North Carolina military base.

Tickets to the game were supposed to be nontransferable, and they were only given to Department of Defense members and their families.

But somehow Zack Hample got his hands on one. Hample, who most famously caught Alex Rodriguez's 3,000 hit, posted on his Twitter account about the experience.

It wasn't until he wrote about snagging one of those commemorative balls, though, that the internet ire set in.

Many commenters on Twitter suggested he give any balls he caught to kids and leave the game immediately.

The 82nd Airborne Division, which is based at Fort Bragg, even got in on it, too.

But from the looks of it, Hample stayed for the entirety of the game.

The 38-year-old said he got the ticket through a friend, donated $100 to charity for every ball caught and gave 10 out of the 11 balls he snagged to kids.

It's still unclear exactly how Hample got his hands on a ticket, but the ball collector said he was excited to be in attendance at his 52nd MLB stadium. Hample has reportedly caught about 9,000 balls over his lifetime.

This video includes clips from ESPN and Fox Sports and images from Getty Images.