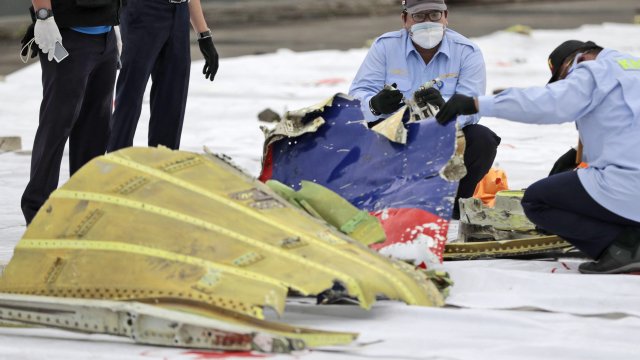 Rescuers have located parts of a downed Indonesian passenger jet in the Java Sea a day after its crash, finding the aircraft's black boxes and communications data.

Search and rescue operations pulled parts of the Boeing 737-500 along with human remains from the crash site. A navy ship's sonar system detected the jet's black box emergency signal coming from 75 feet below the surface.

Now Indonesia's National Search and Rescue Agency is hoping to lift the flight recorder to determine the cause of the crash.

The jet crashed into the ocean with 62 people on board minutes after taking off from the country's capital Jakarta on Saturday. It disappeared from radar just after dropping 10,000 feet in less than a minute. Fishermen in the area reported hearing an explosion and experiencing a sudden large wave around the time the plane went missing.

There has been no sign of survivors. Indonesian authorities have asked family members of known passengers for DNA samples to help identify the remains they have found.

The crash brings more trouble for Chicago-based Boeing. In 2018, a Boeing 737 Max 8 wrecked in the same sea, killing all 189 people aboard. And another crash in Ethiopia five months later lead to the grounding of the Max 8 worldwide for 20 months. But both those crashes had issues with an automated flight-control system that the Indonesian aircraft did not have.

That aircraft in Saturday's crash...the Boeing 737-*500... is considered a workhorse model. The president of Sriwijaya Air said the plane that crashed had just completed another flight the same day.