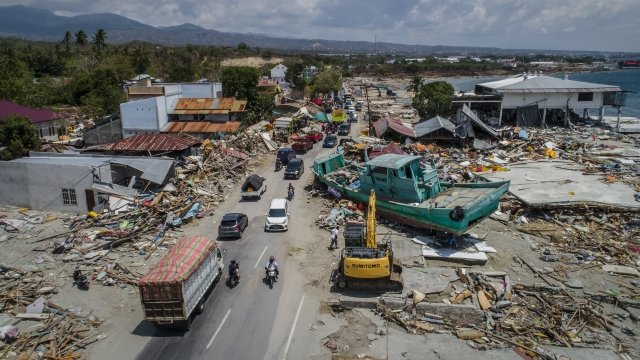 By Katie Cammarata
October 8, 2018
Majority of the deaths confirmed so far were in Palu, Indonesia, a city of some 350,000 people near the quake's epicenter.
SHOW TRANSCRIPT

The death toll from a 7.5 magnitude earthquake that triggered a tsunami in central Indonesia more than a week ago continues to rise.

Officials from the Indonesian disaster management agency said nearly 2,000 people have died. A majority of the deaths confirmed so far were in Palu, Indonesia, a city of some 350,000 people near the quake's epicenter.

Tens of thousands of people are displaced after the disasters washed away entire neighborhoods.

And thousands more are still believed to be missing. The head of the disaster management agency told news outlets that some 5,000 people could still be buried under deep mud in some of the hardest-hit neighborhoods.

Rescue efforts will continue at least until Thursday, though they could be extended.

This is just the latest disaster to rock Indonesia in recent months. In August, earthquakes in the country killed more than 400 people on the island of Lombok, a popular tourist destination.