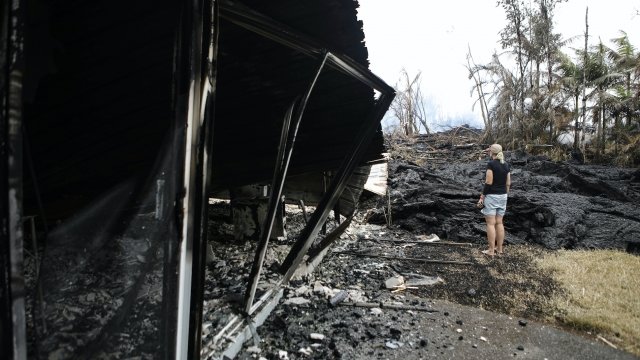 SMS
Trump Approves Individual Assistance For Hawaii Volcano Victims
By Katherine Biek
By Katherine Biek
June 15, 2018
This assistance will help residents whose homes were destroyed or damaged because of the ongoing Kilauea volcano eruptions.
SHOW TRANSCRIPT

President Donald Trump approved individual assistance for residents whose homes were destroyed or damaged because of the ongoing Kilauea volcano eruptions in Hawaii.

The assistance is coming from a Federal Emergency Management Agency program that provides money to eligible residents for temporary housing, home repair and replacement costs and other disaster-related expenses not covered by insurance.

This spike in volcano activity has been going on for more than a month. On Wednesday, the U.S. Geological Survey said lava from Kilauea had covered more than 9 square miles of the island.

The governor's request on Wednesday said the ongoing eruptions have destroyed an estimated 455 residential dwellings. He noted 192 of them were the primary residence for the people who lived there.

Big Island Mayor Harry Kim has said the number of homes damaged is much higher, though.