Indigenous People Are Wearing Kokum Scarves In Support Of Ukraine 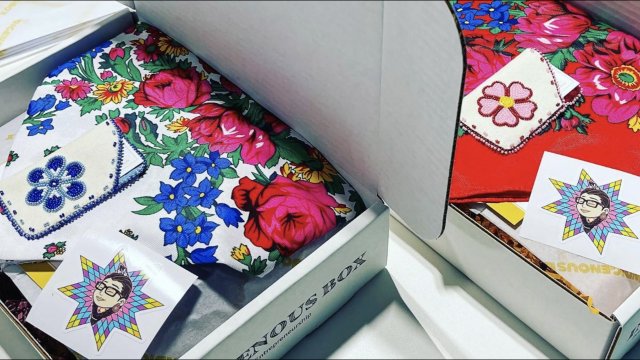 SMS
Indigenous People Are Wearing Kokum Scarves In Support Of Ukraine
By Allison Herrera
By Allison Herrera
March 3, 2022
A business owner posted the history of the kokum scarf on her company's blog. Now people are wearing them to show support for Ukraine.

Yawnghwe said the scarves were gifted to her people when Ukrainians immigrated in 1891 to Alberta and the Saddle Lake Cree Nation where she’s from in northeastern Alberta.

"When I was a kid, I'd always remember my grandmothers, you know, picking berries or whenever there was like hard work to do," she said, "they would always take their scarves and tie up their hair, tie their hair back, or they would use it as an apron."

Yawnghwe posted about the history of the kokum scarf on her company’s blog a year ago, but because of the conflict in Ukraine, she thought it was relevant to share it again. Then many people started sharing it, and #solidaritywithukraine went viral. Many Indigenous people started wearing their kokum scarf and posting about it on Twitter and TikTok.

Kokum scarves are a regular feature in Indigenous design and fashion. They get incorporated into powwow regalia and ribbon skirts, and are worn around the head during ceremonies and dances.

"The collaboration and the community and the support that we have as Indigenous people, with other nations, with settlers back in the day when our grandmothers were making connections with Ukrainian families and they were, you know, they share this common goal was to take care of their families," Yawnghwe said.

Yawnghwe posted that she wanted to hold space for Ukrainians as they fight for their country. She said a lot of Indigenous people can relate to what’s happening in Ukraine right now.

"At the end of the day, it's people fighting for their sovereignty to protect who they are as nations, as individual people and individual nations," she said. "I think that's what makes the world such a beautiful place to be in is our differences and our commonalities and how we can come together to create an incredible community worldwide."

And it’s not just people like Yawnghwe showing support for Ukrainians.

President Jonathan Nez of the Navajo Nation and Principal Chief Chuck Hoskin Jr. of the Cherokee Nation posted statements on Twitter saying there have been times in both of their nations' histories where they were denied the right to chart their own destiny.

Yawnghwe said both communities faced hardship in Canada-Indigenous people through forced relocation, and Ukrainians facing discrimination as immigrants to a new country.

"I think it's important that we recognize that, you know, that as Indigenous people, we've had so much community support from nations, especially down here on the Prairies like a long time ago, like actually not that long ago," Yawnghwe said. "Unfortunately, our communities faced so much hardship and famine, so we got to share in food and beauty and taking care of our families."

Yawnghwe is glad her words have gotten out there, and she hopes Ukrainians from all over can feel their prayers and support.