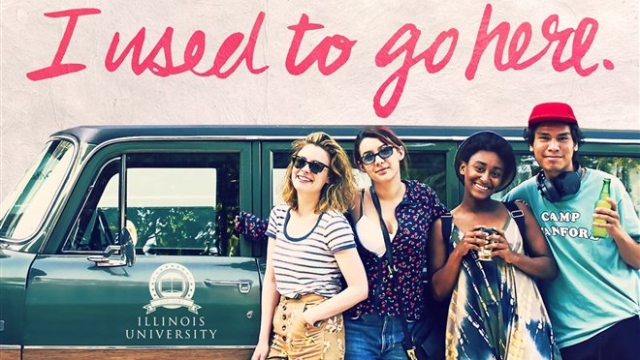 "I Used To Go Here" is a comedy about a woman who visits her alma mater and gets caught up in the lives of college students. Written and directed by indie filmmaker Kris Rey, the film was originally slated to screen at South By Southwest, which was canceled in March due to the pandemic.

Kris Rey, writer and director of "I Used To Go Here" said, "When South By Southwest got canceled — that's where the film was going to premiere — I was really freaked out. We had a great premiere slot. We were in a theater that holds 500 people. It was a sold out screening, and I really do mourn the loss of that experience."

Despite the loss of the physical premiere, Rey and her distributors re-routed the film to drive-in theaters, virtual festivals and independent venues like the Music Box Theatre in Chicago.

Rey: "The movie did find a home … I think more people have seen the film than they may have otherwise, because just not a lot of new work has been coming out in the last six months."

Safely distributing new films during the pandemic has been one of the biggest issues in entertainment this summer. But because of the flexibility of indie films, which are typically distributed on a smaller scale, the lack of big-budget competition has helped.

Before the new high-budget releases of Warner Bros.' "Tenet" and Disney's "The New Mutants," several of this summer's top grossing titles were indie films.

Despite social distancing measures and lows for the domestic box office, the entertainment industry is still pressing forward with the Toronto International Film Festival and the New York Film Festival — both of which started this month with drive-in and virtual screenings.

Outside of those events, Rey is continuing to promote "I Used To Go Here" and speaking on a panel about the future of independent films at the Chicago Humanities Festival.

Said Rey: "Maybe I'm naive or just optimistic or something, but I do feel like people like watching things, and especially now everyone's craving new stuff … and so, there's still a strong desire for independent work."