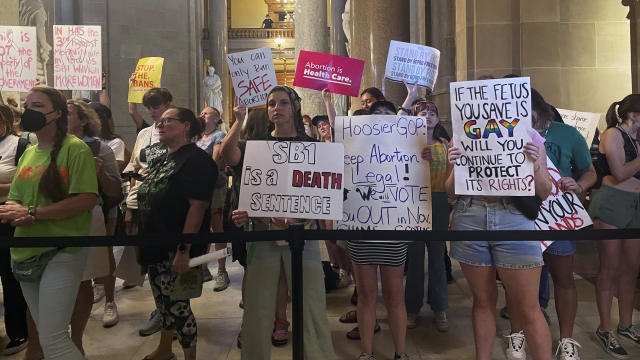 SMS
Indiana Becomes 1st State To Approve Abortion Ban Since Roe Reversal
By Maura Sirianni
By Maura Sirianni
August 6, 2022
Under the bill, all abortion clinics would lose their licenses, and abortions will be performed only in hospitals.

Indiana has approved a near-total ban on abortions that will take effect next month, making the state the first in the nation to pass sweeping abortion restrictions since the U.S. Supreme Court overturned Roe v. Wade.Indiana Gov.

Eric Holcomb announced late Friday that he had signed Senate Bill 1, a measure that would ban abortions in the state, with few exceptions.

The vote in Indiana Statehouse followed an emotional, and at times contentious, debate.Much of the debate was over whether to remove language exempting rape and incest victims from forced childbirth.

Lawmakers ultimately voted to keep some exceptions: Abortions would be permitted in cases of rape, incest, and for when the life of the pregnant person or fetus is at risk.

Politicians on both sides noted the time crunch they were under to consider such a difficult topic."Indiana is one of the most dangerous states in the nation for pregnant women," said Rep. Robin Shackleford."People who don't want to accept what the Bible has to say ... I want to defer to science because science clearly says that human life begins at conception," said Rep. John Jacob.

"In this chamber, 73% of you will never know that aftermath of trauma or pregnancy or just the possibility of pregnancy after a rape; and yet we're all voting," said Rep. Ann Vermilion.Particular attention has been placed on Indiana after the story of a 10-year-old rape victim from Ohio who traveled to a hospital in Indianapolis to receive abortion care created a political firestorm.

Earlier this week, the doctor who performed the child's abortion took to Twitter, blasting the bill as it made its way through the general assembly.

She said, in part:"I am deeply disturbed by the bill being considered by the Indiana legislature. I've practiced medicine for 12 years and follow a code of ethics, so I know medicine is not about exceptions. Every person deserves to have equal access to the best medical care.

Leading up to the decision in Indiana, several thousand people lined the sidewalks outside Indiana Statehouse corridors.Some angered: "I'm a nurse, and abortion is health care, abortion saves lives, and we need to continue to health care as women," said Cami Keltch, a pro-abortion rights protester.

Others praising lawmakers who were in favor of passing the harsh new legislation:"First and foremost, I'm a Christian. And so, I see a lot of people that don't have hope and I'm praying for them," said Emily Wamsley, an anti-abortion rights protester.Indiana's Senate Bill 1 replaces the state's current 22-week abortion ban. The new near-total abortion ban is set to take effect Sept. 15.