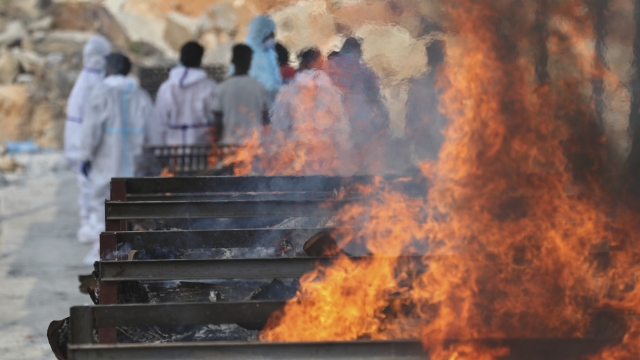 India has suffered a sharp spike in COVID-19 cases and deaths in the past month.

India is caught up in its worst phase of the pandemic yet. The second-most populous nation has seen a sharp spike in infections and deaths over the past month. Here in the U.S., college students are banding together in hopes of raising money for much-needed supplies, like oxygen tanks and hospital beds.

“You keep hearing every single day, not just one death, but two, three. ... Everyone knows someone who has passed away, or someone in their family has passed away. And that's terrifying,” Sudhanshu Kaushik said.

Sudhanshu Kaushik is the executive director of the North American Association of Indian Students. He helped create a coalition focused on providing assistance to friends and family in his home country.

“We often see that this younger generation, and when it comes to the Indian generation or Indian American, that they're kind of far removed from India or they're not as interested. And now, every other post on social media of, 'Hey, I'm doing this crowd sourcing. I'm doing this fundraiser. I'm doing this organizing.' Someone's creating email campaigns. Someone's, you know, talking to their employer. So it's outstanding, over 650 students have been proactively organizing, and they have taken a pledge, and over 50 associations, that they will crowd fund they will raise awareness, and all over the United States and Canada,“ Kaushik said.

Kaushik worries about his own family members abroad after they were exposed to the virus.

“I was worried about my grandmother, who has crossed the age of 80 and was living and eating with this entire family who had COVID. So you're terrified for what's to come. And every single day, I would, I would kind of wait for a phone call to say, oh, she had started showing symptoms. And thankfully, she hasn't gotten it yet. And I don't know how, but she's safe,” Kaushik said.

He’s not the only coalition member stressing about the health of family; 24-year-old Priyasha Deshpande had the painful experience of losing her grandfather to a lung infection she believes was COVID-related. He died before he was able to get tested, an issue a lot of Indians are facing due to an overload on the system.

“I feel like it's a it's a whole lot of emotions to even put in words, because first of all, staying away from family for that long is not something that I'm used to. You just feel overwhelmed and helpless at the same time," Deshpande said.

Now, the City University of New York student volunteers her time to help others.

Kaushik says the North American Association of Indian Students has raised more than $25,000 in less than a week.

“Nothing we do right now seems like it's enough. And that, I think, pushes us and motivates us and kind of keeps us on our toes to say, hey, this isn't enough, right? We should be doing even more. And I think everyone in our team feels that way as well,” Kaushik said.

He says they will continue raising money even after the outbreak is under control in order to help with future preventative measures.