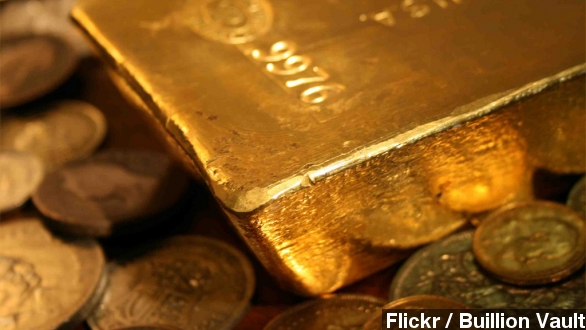 SMS
Indian Man Swallows $16K Worth Of Gold Bars
By Kristian Mundahl
By Kristian Mundahl
April 18, 2014
The 63-year-old was reportedly attempting to circumvent India's high gold import duties. He had to have the gold surgically removed.
SHOW TRANSCRIPT

​For a couple days, one Indian businessman was worth his weight in gold. Well, at least a little bit.

According to his doctor, the 63-year-old businessman swallowed 12 small gold bars, weighing nearly 1 pound, in an attempt to smuggle the precious metal past Indian customs. The Guardian reports the man checked himself into a hospital after a few days of vomiting and trouble defecating.

After a three-hour surgery doctors called "tedious," the nearly $16,000 worth of gold was safely removed from the man's stomach and promptly confiscated by the police. (Via The Guardian)

The man's doctor at Delhi's Sir Ganga Ram Hospital says it was one of his strangest operations. "I remember having taken out a bladder stone weighing 1kg from a patient. But finding gold in a patient's stomach was something unbelievable." (Via BBC)

Believe it or not, gobbling gold isn't unheard of in south Asia. Because India imports the most gold in the world, its 15 percent import tax on the metal is one of the highest and spurs many to go "bottoms up" with their bars. (Via YouTube / Periodic Videos)

According to the BBC, the hike has caused gold imports to plummet nearly 90 percent in the past year. But the element remains popular for Indians of all areas and classes.

"Shops sell it from north to south India. The rich buy it more, but even those people who generally struggle to meet their basic day-to-day needs don't hesitate to buy it whenever they possibly can."

And due to the tax increase, smuggling is on the rise. In September, two Sri Lankan men were caught with several kilograms of gold biscuits concealed in their rectums before a flight to India. According to Mining.com, it was the most gold Sri Lankan officials had ever found in a human body.

Left up to us, we'd rather just pay the fee since, according to the Air Intelligence Unit at a Mumbai airport, concealing gold bars inside the body can lead to infections, pain and rashes. Ouch.