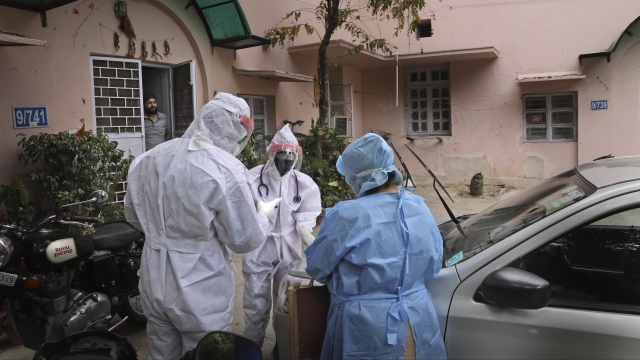 As coronavirus cases continue to rise in India, the country is taking extraordinary steps to know exactly who is healthy and who's not.

Officials in the capital of New Delhi are launching a screening campaign to cover all of the city's 29 million residents. Over the next two weeks, they'll go door-to-door, asking people about their health and checking for signs of a fever. Anyone who shows or reports symptoms will be tested for COVID-19.

India announced Thursday that almost 17,000 new cases of COVID-19 had been reported within the past 24 hours — a new daily record for the country with the fourth-highest number of cases in the world.

New Delhi is India's hardest-hit city, and the government predicts the number of cases just within the area could rise past half a million by late July. Because of this, authorities are turning hotels, banquet rooms and even train cars into treatment centers and 20,000 more hospital beds are being shipped to the city.

Despite the rise in cases, the chief minister of Delhi said last week that there are no plans to impose another coronavirus lockdown on residents.