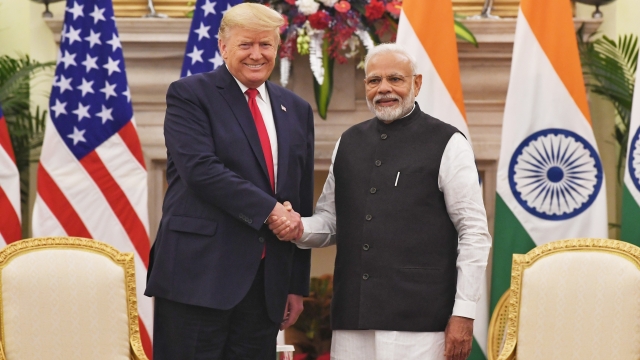 SMS
India To Purchase $3 Billion Worth Of Military Equipment From U.S.
By LeeAnne Lowry
By LeeAnne Lowry
February 25, 2020
At a news conference, President Trump said the relationship between the U.S. and India is stronger than it's ever been.
SHOW TRANSCRIPT

President Donald Trump says India has signed a deal to buy $3 billion worth of military equipment from the U.S.

The deal, which materialized during the president's first trip to India, is a shift in trade relations. Tensions escalated last year when the U.S. ended India's special trade status and India retaliated with tariffs on 28 U.S. products.

At a press conference, the president said the two countries have a stronger relationship than ever before:

President Trump said, "We think we're at a point where our relationship is so special with India, it has never been as good as it is right now and I think that's because the two leaders of each country we feel really strongly about each other, we have done something that is very unique and we've made some wonderful deals for each of our countries."