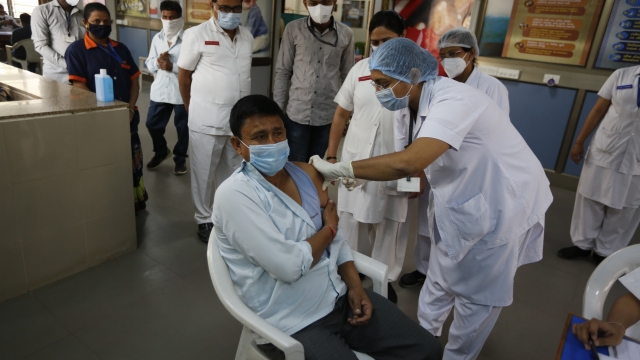 The government initially plans to vaccinate 300 million people in the country of nearly 1.4 billion people. Its first priority for the vaccine will be some 30 million doctors, nurses and other front-line workers.

"I'm feeling like hopeful, like 2021 will give us better days to go ahead," said Roshan Mathew, a doctor at All India Institute of Medical Sciences, New Delhi.

The next phase of vaccinations will target some 270 million people who are 50 or older or have underlying health conditions.

India has some 3,000 vaccination centers across the country and plans to vaccine 100 people at each center on the first day of the campaign. The country has the world's second largest number of confirmed coronavirus cases, behind the U.S.

India has issued an emergency use authorization for two vaccines, including one developed by Oxford University and drugmaker AstraZeneca.

"An emergency authorization have been given to them after ensuring that they are safe, they are effective and they have adequate immunogenic response," India Health Minister Harsh Vardhan said.