India Extends Nationwide Lockdown Over Coronavirus Into May 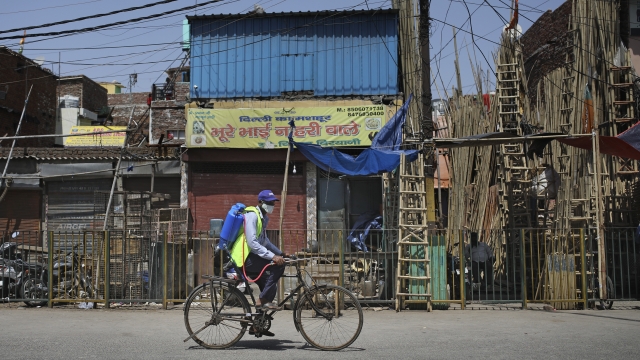 SMS
India Extends Nationwide Lockdown Over Coronavirus Into May
By Katherine Biek
By Katherine Biek
April 14, 2020
The nation of 1.3 billion people was originally put under a 21-day lockdown in late March.
SHOW TRANSCRIPT

India is extending its nationwide coronavirus lockdown until at least May 3.

Prime Minister Narendra Modi announced the news Tuesday. He said in his address: "From the economic angle, we have paid a big price. But the lives of the people of India are far more valuable."

The nation of 1.3 billion people was originally put under a 21-day lockdown in late March. That lockdown had been scheduled to expire Tuesday night before Modi extended it.

Essential services, like utilities, grocery stores and health care facilities, are still open during this time. But schools, places of worship and nonessential businesses shut down. And public transportation, including buses, trains and flights in and out of the country, have been suspended.

The number of confirmed coronavirus cases in India is relatively low compared with the U.S., China and much of Europe. But health experts warn that infection rates in India could actually be a lot higher. Reuters reports the country has only tested a very small portion of its population.

Modi said some areas that are not believed to be hot spots for COVID-19 could see the lockdown relaxed after April 20.