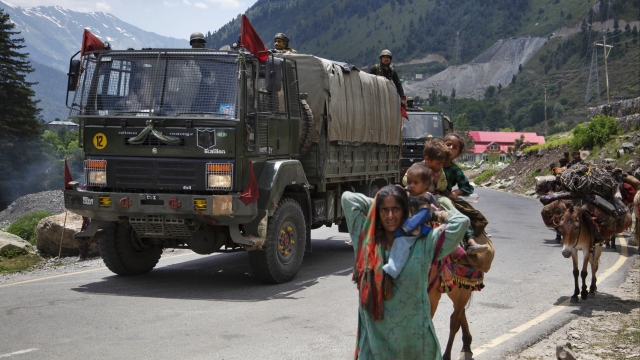 Relations between the nuclear-armed neighbors reach worst ebb in decades after 20 Indian troops die and unknown Chinese casualties occur in the melee.

Angry protests against China are aflame in India. And Indian troop convoys were on the move Wednesday toward a disputed border region high in the Himalayas.

On Monday, Indian and Chinese troops clashed in a violent brawl near this Alpine lake and this desolate, disputed border road. Twenty Indian soldiers were killed and unknown Chinese casualties occurred as they fought with rocks, firsts and bamboo sticks.

And now China is flexing its muscles. It released this undated video of military exercises held nearly 800 miles away, but also along the Indian border.

India and China, geopolitical foes and both nuclear armed, have faced generational tensions over this 2,100-mile region near India's Galwan Valley. They fought a war in 1962 and reached a tense truce on the border line.

Yet    a senior fellow at the Carnegie Endowment for International Peace, says neither India nor China is willing to surrender territorial claims to the region. In this presentation Tuesday, he said neither country wants war, but this clash will harden relations.

"What has happened in the last 24 hours changes this dynamic quite significantly because lives have now been lost on both sides," Tellis said. "This suggests to me that Sino-Indian relations can never go back to the old normal. They will reset with greater competitiveness and in ways that neither country had actually intended at the beginning of this crisis."

Only two years ago, Indian Prime Minister Narendra Modi met in a summit with Chinese leader Xi Jinping. They pledged enhanced security communications to maintain peace on the border. But Monday's clash — even with no shots fired — was the worst in 40 years.

On Wednesday, Modi mourned India's lost soldiers. He said: "We never provoke anyone. But at the same time we never compromise with the integrity and sovereignty of our country."

Zhao Lijian, China's foreign ministry spokesman, said he hoped "India will meet China halfway." He said: "As the world's two biggest developing countries and emerging economies, the shared interests of China and India are far greater than their differences."