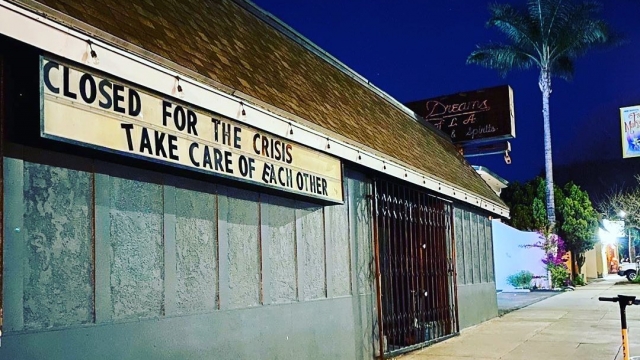 It's Independent Venue Week, an annual celebration of live indie music clubs and concert halls around the country. But this year, rather than celebration, venue owners and music lovers are focused on survival.

With no revenue coming in from live events, coupled with mounting expenses from bills, insurance or payroll, some venues are playing virtual concerts, selling merchandise or keeping kitchens open for online orders.

Nationwide efforts from the National Independent Venue Association and the Recording Academy are hosting concerts and collecting donations for emergency relief funds. The Venue Association — whose concert series #SOSFest hosted artists like Dave Matthews, Reba McEntire, The Roots, Miley Cyrus and Monica — has so far raised more than $1.8 million to help indie venues.

Singer-songwriter Monica: "Had it not been for this venue, I don't know exactly where I'd be, because this is the place that all of my dreams began to come true."

The efforts from artists and donations from patrons show heavy support for struggling indie venues, but that might not be enough in the long term.

Moose: "Those aren't solutions. These are short-term. It's like putting putty in a wall as the earthquake is happening."

Instead, the music industry is pushing for federal financial support from legislation like the Save Our Stages Act, a $10 billion measure that has bipartisan support and was included in the House of Representatives' $2.2 trillion COVID relief plan but has stalled in the Senate.

Minnesota Sen. Amy Klobuchar: "Music is one of the most amazing parts of America's culture."

Missouri Sen. Roy Blunt: "That's why I support the Save Our Stages Act and look forward to being back in these venues."

Moose: "We're seven months into the pandemic. Our plight has been made clear. We have a potential resolution. Until that resolution is put into place, I don't know what people are expecting to happen other than more closures."