Independence Day 2015: By The Numbers 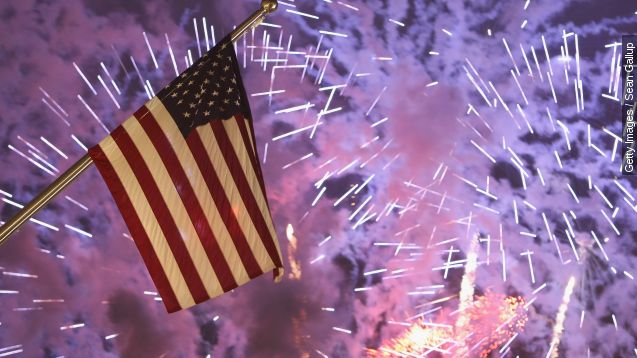 SMS
Independence Day 2015: By The Numbers
By Eugene Daniels
By Eugene Daniels
July 3, 2015
Americans will spend most of their time this holiday weekend eating, watching fireworks and traveling. We'll break it down for you.
SHOW TRANSCRIPT

"Today we celebrate our Independence Day!"

But we will be buying fireworks, traveling and gorging ourselves.

The American Pyrotechnics Association, or APA, (yes, that's a thing) says Americans could buy up to $725 million in consumer fireworks — basically, backyard fireworks.

That's quite the jump from the $695 million spent around this time last year.

The APA says we've been snatching up more fireworks because many states have relaxed bans against them.

Currently, 47 states and the District of Columbia allow the sale and use of some kind of backyard firework.

But remember to be safe, folks.

The U.S. Consumer Product Safety Commission says, on average, 230 people go to the emergency room every day in the monthlong period around Independence Day. (Video via National Fire Protection Association)

As for travel, AAA estimates nearly 42 million people will hit the roads or take to the skies.

AAA says we can thank low gas prices for that, which gives Americans more money to spend.

Now to the refreshments.

According to the National Retail Federation, more than 156 million adults will be at a cookout or picnic this weekend.

And with the average amount spent on food this year at $71.23, we'll be shelling out more than $6.6 billion total to feed our faces.

And what over-eating, explosive-igniting holiday is complete without alcohol?

Americans will wash all that food and fun down with $1 billion worth of beer.