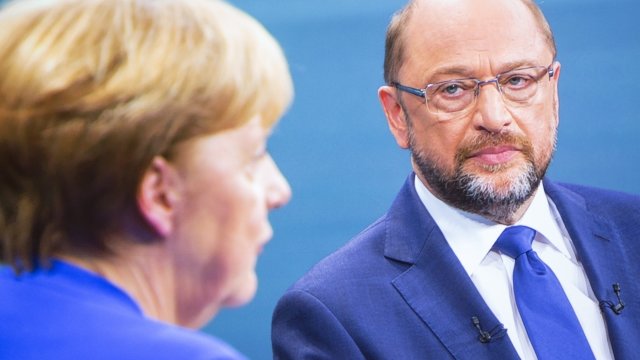 SMS
Merkel Wins Debate, But Nearly Half Of German Voters Still Undecided
By Jake Jones
By Jake Jones
September 6, 2017
There was only one televised debate between the heads of Germany's two largest parties, one of whom will likely become chancellor.
SHOW TRANSCRIPT

Unlike some recent campaigns on the Continent, Germany's federal election has been a bit of a snoozefest.

There was only one televised debate between the heads of Germany's two largest parties. Incumbent Chancellor Angela Merkel sparred with challenger Martin Schulz, a member of the Social Democratic Party, or SPD. But their positions seemed fairly similar.

And for good reason: The SPD has been in a grand coalition with Merkel's Christian Democratic Union — or CDU — for roughly two-thirds of her 12-year tenure.

Merkel rose to the chancellery in 2005 after an indecisive vote followed by then-Chancellor Gerhard Schröder's resignation. She is Germany's first female chancellor. If her party retains power, this would be her fourth consecutive term in office. 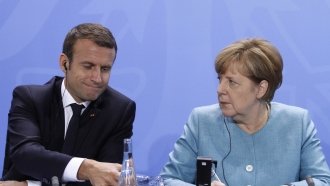 But Schulz's candidacy briefly threatened to upset Merkel's ambitions. Schulz is a former soccer player who reinvented himself as a politician, eventually rising to lead the European Parliament. Polls initially spiked in his favor as he courted Germany's working class, but they've fallen back to Merkel's advantage.

In the debate, Schulz was on the offensive, bringing up Merkel's immigration policy that has brought more than a million refugees and migrants into the country since 2015. He also came out strong against allowing Turkey to become a member of the EU, pointing to President Recep Tayyip Erdoğan's steps toward authoritarianism.

Post-debate polls technically declared Merkel the winner — but almost half of German voters appear to be undecided.

But those voters won't elect a chancellor, but rather cast ballots for a political party as part of Germany's parliamentary system. That election will be on Sept. 24, so there's still time for something exciting to happen.