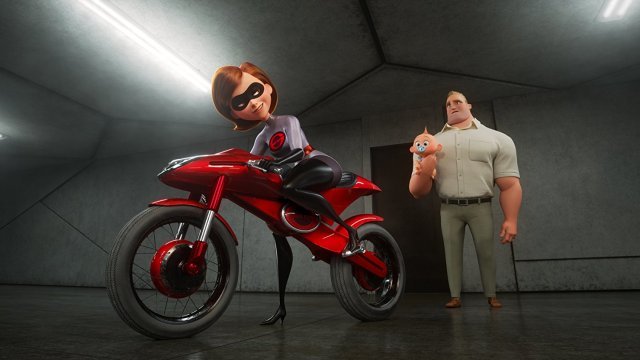 It was a long 14 years, but boy, was it worth the wait. Taking the No. 1 spot and breaking several records along the way is "Incredibles 2" bringing in a pretty incredible $180 million in its domestic debut.

That's the best animated film debut in box office history beating the last record holder, "Finding Dory," by more than $45 million. Not only that, but "Incredibles 2" managed the eighth biggest debut of any film in history — animated or otherwise.

That puts it right between "Avengers: Age of Ultron" and "Captain America: Civil War." So now six of the top 10 best domestic debuts in film history are superhero flicks.

So much for that hero fatigue theory.

Oh, and speaking of heroes, the Incredibles family joins the prince of Wakanda and Thanos by becoming one of the top three best debuts of 2018.

And while Americans are understandably obsessed with this super family, "Incredibles 2" had a solid showing overseas as well, raking in more than $50 million at the foreign box office and pushing the worldwide total past $231 million.

And there's no reason to believe this good fortune is going to slow down. "Incredibles 2" doesn't have any real animated competition at the box office for another month, and critics are providing plenty of support.

Like most of the Pixar films, "Incredibles 2" holds a fantastic Rotten Tomatoes score — with 172 reviews counted, the Tomatometer sits at 94 percent.

Here's to waiting another 14 years for Disney to bring back our favorite animated family. On to No. 2.

Taking the third spot this week is "Tag," bringing in an estimated $14.6 million in its first week out. Considering how huge the "Incredibles 2" premiere was, "Tag" had to fight for box office scraps.

"Superfly," "Ocean's 8" and "Gotti" were all competing with "Tag" for adult moviegoers who didn't want to see an animated Pixar film this weekend.

"Tag" won its box office battle with "Superfly" but definitely lost a chunk of change to Debbie Ocean and company.

As for next week, Chris Pratt manages to be charming at all the wrong times.