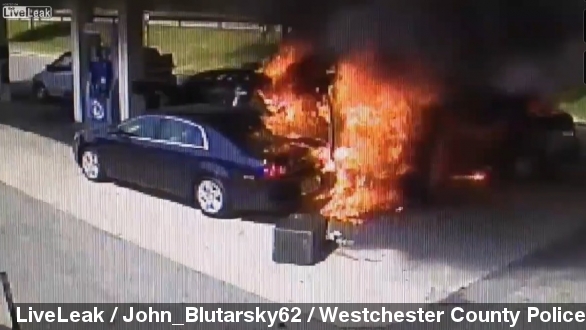 By Christine Slusser
June 13, 2014
A man had a diabetic episode June 3 and crashed his car into a gas pump, causing a fire. A heroic officer then came to the man's rescue.
SHOW TRANSCRIPT

It's a remarkable video you have to see to believe.

A car rams into a gas station pump and causes a fire in White Plains, New York. Then, an off-duty state police investigator, who happened to be at the right place at the right time, rescues the man in the burning car. (Via LiveLeak / John_Blutarsky62 / Westchester County Police)

"Next thing I knew the pump was coming down on top of me." (Via ABC)

Reports say the elderly driver of the car who crashed into the pump on June 3 was having a diabetic episode.

Once the elderly man was out of harm's way, Vescio had to warn people to move away from the scene because the officer had ammunition in his car. Thankfully, The Journal News reports none of it exploded from the heat.

NBC reports there were several injuries from the fire.

"Four cars were damaged, six people were hurt in this, but their injuries were not considered life threatening. ... Thank goodness for that off-duty officer." (Via NBC)

And while Vescio is being hailed a hero, he joked with The Journal News he's still getting treated with no respect by his coworkers.