Increased Law Enforcement Presence In Charlottesville Over The Weekend 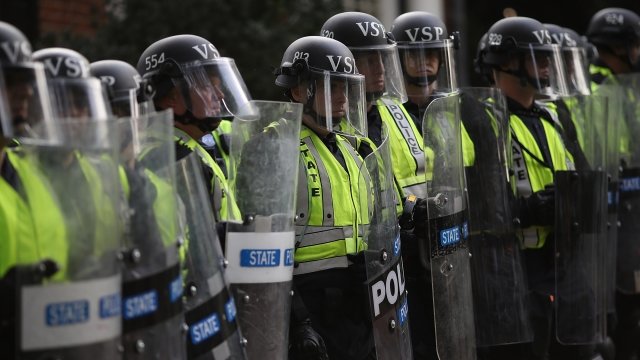 There was a noticeable increase in security forces in Charlottesville, Virginia, over the weekend as the city marked the anniversary of last year's deadly "Unite the Right" rally.

On Saturday, law enforcement officers in riot gear lined up as things got a little tense with some protesters on the University of Virginia's campus. Many demonstrators reportedly yelled at the officers and said they were angry about their "over-the-top" gear.

A former federal prosecutor conducted an independent investigation into the rally. He found the violence resulted from the law enforcement's passive response and poor preparation for the event.

Despite the tense situation, Saturday's rally in Charlottesville remained peaceful, and there were no immediate reports of arrests on the university's grounds.

The AP reports officers outnumbered visitors in the downtown shopping district and were searching people's bags at two checkpoints. Some visitors told media outlets they felt safer with the increased law enforcement presence.