Americans' Income Hasn't Been As Stagnant As Pete Buttigieg Said 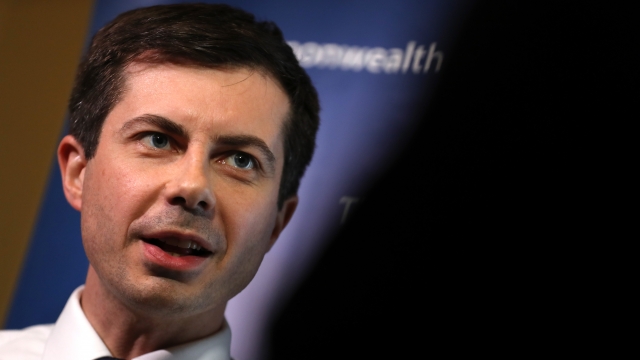 "The top-line growth numbers were pretty great. On the other hand, if my numbers are right, since 1973, the income of the bottom 90% — so pretty much all of us — didn't budge or even retreated a little bit," Buttigieg said.

First, it's worth giving Buttigieg a shoutout for recognizing in the moment that he might not have the details exactly right. That said, is his statistic accurate? Have incomes for 90% of Americans been stagnant for more than four decades?

Many people probably think of their paychecks when they hear the word income, but it can also be calculated to include the value of benefits, taxes, interest earnings and more. We'll look at the numbers both ways, and we'll also adjust for inflation — something economists agree is a must.

The Congressional Budget Office calculates income data with a wider definition, and its latest report covers 1979-2015. The CBO doesn't break out the numbers specifically for the bottom 90% of Americans, like Buttigieg referenced. But for three groupings that make up 99% of Americans, incomes have gone up since 1979. Changes for the top 1% tell a different story. Their incomes increased at a higher rate but fluctuated more drastically along the way. So the CBO data appears to contradict Buttigieg's statement that incomes for 90% of Americans "didn't budge."

Now let's look at just wage information. The Economic Policy Institute has those numbers going back to 1973, the year Buttigieg mentioned. For the bottom 60%, wages didn't increase much from 1973-2018. In that 45-year span, wages for those Americans increased by somewhere between $1.29 and $2.44. Those are pretty small numbers, especially compared with the $22 increase the top 5% saw. We crunched the numbers a few different ways, and in each case the higher income brackets saw their wages grow faster.

We didn't find data that specifically matched up with the percentages and years Buttigieg mentioned, and he didn't specify what he considered income. From what is available, it looks like his statement that incomes "didn't budge, or even retreated a little bit," isn't quite right. But he does have a point that incomes for higher earners have seen bigger benefits since the 1970s.