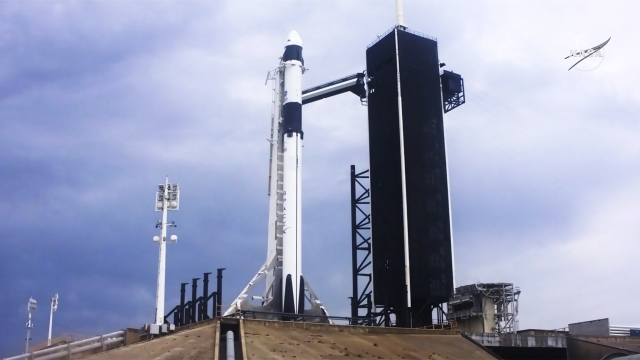 Minutes before SpaceX Crew Dragon was scheduled to fly to the International Space Station, a call of inclement weather postponed the mission.

The launch has been rescheduled for Saturday.

When it lifts off in Florida, Demonstration Mission Two, or Demo Two, will be the first commercial spaceflight with astronauts on board and the first manned spaceflight to leave from U.S. soil since 2011.

Nearly nine years ago, STS-135, the final space shuttle mission, took off from the same Kennedy Space Center launch platform, 39A, used for the Apollo 11 moonshot mission half a century ago.

For almost nine years, American crews have relied on Russian Soyuz spacecraft for passage to the International Space Station, with NASA paying an estimated $81 million per seat to Russia.

Aboard the SpaceX Crew Dragon launch will be astronauts Douglas Hurley and Robert Behnken, both veterans of the Space Shuttle Program.

President Donald Trump and Vice President Mike Pence were on hand to witness the scrubbed launch, some of few on the guest list due to concerns about the coronavirus.

“We’re asking people not to travel to the Kennedy Space Center, and I will tell you that makes me sad to even say it,” NASA Administrator Jim Bridenstine announced back on May 1.

“I just thought it's such an important part of our life to see [it],” an onlooker told Newsy sister station WPTV. “It’s worth the risk.”