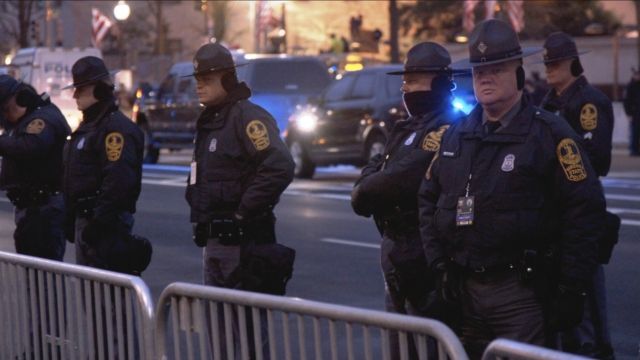 SMS
Here's What D.C.'s Inauguration Security Looks Like On The Ground
By Zach Toombs
By Zach Toombs
January 20, 2017
Security agencies are preparing for threats and surges of protesters.
SHOW TRANSCRIPT

It's Inauguration Day, and we're on the ground to see the unprecedented security in Washington, D.C.

Security agencies are preparing for threats, including vehicular attacks and terror attempts, but are also getting ready for a surge of protesters.

Brian Ebert of the U.S. Secret Service said: "So I want to make it clear that the Secret Service respects the right of the public to demonstrate and to voice their views, but if someone chooses to break the law, we have a plan in place to efficiently address that."

The main event is playing out on the west side of the Capitol, and crowds will stretch down the National Mall. The new president will be sworn in at noon Eastern and will give his speech. In addition to presence from the Secret Service and D.C. Metropolitan Police, 3,000 officers from across the U.S. will be in town, as will 5,000 members of the National Guard.

These agencies are setting up a strict perimeter around the parade route. That stretches from Capitol Hill along Pennsylvania Avenue to the White House, which Donald Trump and his family are scheduled to travel on at 3 p.m. Eastern.

Overall, Homeland Security expects only about 900,000 people to attend — about half the crowd President Obama drew. But this weekend will see more protesters than ever. Twenty-five demonstrations in D.C. secured permits.

The main protest will come Saturday when the Women's March expects close to 200,000 people nationwide to come out against the new president's policies and his own words about women.