In Wide-Ranging Q&A, Trump Defends His Push For Border Wall 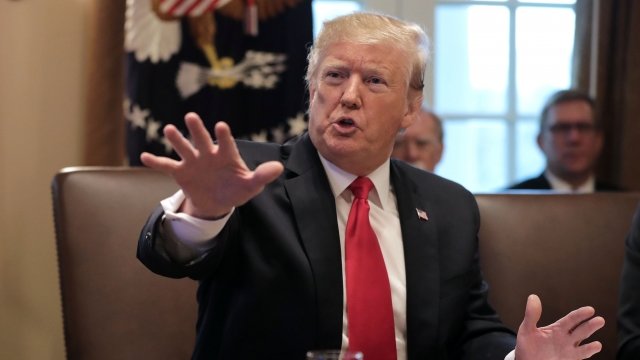 Ahead of his first cabinet meeting of 2019, President Donald Trump took questions from the press. And that led to a wide-range of topics, including an op-ed from Mitt Romney, the troop withdrawal from Syria, gas prices, and, of course, the government shutdown.

Trump's off-the-cuff remarks hit a few different points to defend his call for a southern border wall. But some of his claims lacked important context.

"When they say the wall is immoral well then you have to do something about the Vatican because the Vatican has the biggest wall of them all," Trump said.

There are walls that separate parts of the Vatican City from Rome, but to draw a comparison to a U.S.-Mexico border leaves out important context. The Vatican walls were built centuries ago to protect the city from invasions. And today, people can freely walk from Rome into St. Peter's Square.

"Look at all the countries that have walls. And they work 100 percent," Trump said.

True, other countries around the world have walls or fences along their borders, and some have successfully decreased illegal immigration. But the claim that walls work "100 percent" should probably be taken with a grain of salt.

Trump's call for a border wall funding pushed the government into a partial shutdown. And so far there hasn't been much progress toward a compromise.

"How long do you think the government will stay partially shutdown?" a reporter asked.