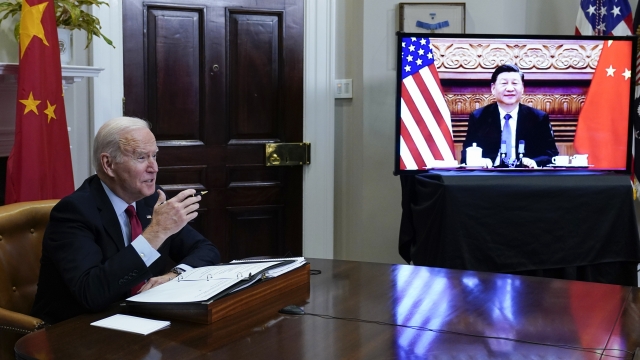 President Biden and China's Xi Jinping spoke by video call Friday as The White House warns Beijing that providing military or economic assistance for Russia's invasion of Ukraine will trigger severe consequences from Washington and beyond.

Planning for the call has been in the works since President Biden and Xi held a virtual summit in November, but differences between Washington and Beijing over Russian President Vladimir Putin's prosecution of his three-week-old war against Ukraine are expected to be at the center of the call. 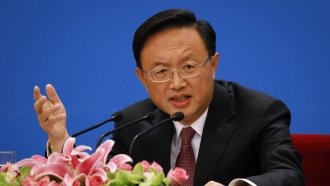 U.S., China Officials To Meet As Tensions Mount Over Russia

White House press secretary Jen Psaki said earlier this week that the president would question Xi about Beijing's “rhetorical support” of Putin and an “absence of denunciation" of Russia's brutal invasion of Ukraine.

“This is an opportunity to assess where President Xi stands,” Psaki said.

China on Friday again sought to highlight its calls for negotiations and donations of humanitarian aid, while accusing the U.S. of provoking Russia and fueling the conflict by shipping arms to Ukraine.

“China has called for every effort to avoid civilian casualties all the time,” Foreign Ministry spokesperson Zhao Lijian told reporters at a daily briefing. “Which do the civilians in Ukraine need more; food and sleeping bags or machine guns and artillery? It’s easy to answer.” 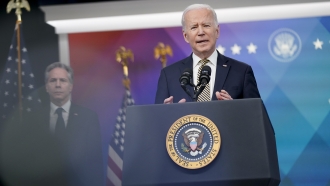 The U.S.-China relationship, long fraught, has only become more strained since the start of Biden's presidency. He has repeatedly criticized China for military provocations against Taiwan, human rights abuses against ethnic minorities and efforts to squelch pro-democracy advocates in Hong Kong.

In the days after Putin deployed Russian forces in Ukraine, Xi’s government tried to distance itself from Russia’s offensive but avoided criticizing Moscow. At other moments, Beijing’s actions have been provocative and have included amplifying unverified Russian claims that Ukraine ran chemical and biological weapons labs with U.S. support.

Earlier this week, the U.S. informed Asian and European allies that American intelligence had determined that China had signaled to Russia that it would be willing to provide both military support for the campaign in Ukraine and financial backing to help stave off the impact of severe sanctions imposed by the West.

Secretary of State Antony Blinken on Thursday reiterated that the Biden administration remains concerned that China is considering providing military equipment to Russia. He said President Biden would make clear to Xi “that China will bear responsibility for any actions it takes to support Russia’s aggression, and we will not hesitate to impose costs."

Xi and Putin met in early February, weeks before the invasion, with the Russian leader traveling to Beijing for the start of the Winter Olympics. During Putin’s visit, the two leaders issued a 5,000-word statement declaring limitless “friendship.”

Though seen as siding with Russia, China has also reached out to Ukraine, with its ambassador to the country on Monday quoted as saying, “China is a friendly country for the Ukrainian people. As an ambassador, I can responsibly say that China will forever be a good force for Ukraine, both economically and politically.”

Despite tensions in U.S.-China relations, President Biden and Xi have sought to keep the leader-to-leader dialogue open and have become familiar with each other through their political rise.